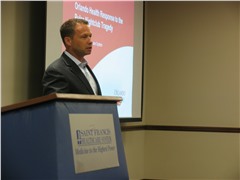 David Strong, president and CEO of Orlando Health, gave two presentations at Saint Francis Medical Center last Wednesday to help about 100 first responders and hospital personnel respond to a mass shooting such as the one that happened three blocks from one of his hospitals.

On June 12, 2016, a gunman killed 49 people and wounded 53 in a terrorist attack inside Pulse, an Orlando, FL, night club. This was the deadliest mass shooting by a single shooter in U.S. history and the deadliest attack in the U.S. since Sept. 11, 2001.

Orlando Health’s main hospital, Orlando Regional Medical Center, treated 44 of the more than 50 victims in need of immediate medical attention. Of those 44 victims, 35 arrived alive. Every patient that made it into the operating room survived.

The Orlando Regional Medical Center in downtown Orlando has a large trauma center. It deals with 5,000 traumas a year and is the busiest trauma center in the U.S.

Recounting the events of that early Sunday morning, Strong said the hospital had a “heads up” that a shooting had taken place at the Pulse because a police officer’s wife worked at the hospital and she received a call from her husband. The magnitude of the shooting was not yet known.

The shooting occurred at 2:04 a.m. Ten minutes later, the first patient arrived at the hospital. Ten minutes after that (2:24) 10 more patients arrived by car. More than half the patients arrived in private vehicles instead of ambulances. At 2:34 resident surgical fellows were called to work. These “fellows” had just completed their fellowship to become doctors. Some thought the call was a prank being made to celebrate the completion of their work — until they arrived at the hospital.

At 2:44 the ninth patient was pronounced dead. “No person died since then,” Strong said.

The next event Strong mentioned was kept out of the news. At 3:35, it was reported (in error) that there was an active shooter inside the hospital. Some police officers were diverted from their important duties to search the hospital for this nonexistent shooter.

Meanwhile, in the trauma center, the teams were aware that a call for an active shooter in the hospital had gone out. They locked their doors, blocked them with heavy equipment, texted their loved ones, and kept working to save victims.

At 5:25 the police SWAT team penetrated the night club and killed the shooter.

Strong reported on what went well.

1. The clinical response. Six trauma surgeons were working within an hour. They never ran out of blood. More than 550 units of blood were given to patients that morning. One patient alone required 220 units.

2. Incident Command. A command center was set up and running in the hospital within an hour.

3. A mass casualty drill in March of that year helped prepare staff for this tragedy. “We have a lot of drills,” Strong said. “Our preparation has gotten better.” The drills involve more than 70 agencies (police, fire,  ambulance, etc.) and more than 700 volunteers.

4. Care was given to team members and physicians. Counselors were brought in to help them “People who deal with victims want to talk about it. Others feel guilty because they were not there (on duty at the time),” Strong explained.

Strong then mentioned lessons that were learned.

1. Dealing with the media. It was decided to hold a press conference to be transparent about the event. When the first question came from a reporter from Dublin, Ireland, it was realized for the first time how huge a news event this was. What was thought to be a local incident (it happened three blocks away) was an international news event with reporters from around the world coming to the hospital.

Famous newscasters showed up and the hospital had to deal with, not just the media, but with the public who wanted to meet famous news personalities.

2. Dealing with road closures. Employees had trouble getting to work and going home.

3. Dealing with outpouring of gifts and love. “It’s wonderful to receive a gift, but who takes care of it, who distributes it?” asked Strong. Someone sent pizzas to the hospital for the workers. At first the FBI cautioned against eating them since the giver was unknown. But when an FBI agent was seen helping himself to a slice, hospital staff figured the pizzas were okay to eat.

4. Dealing with makeshift memorials. A man showed up with 49 white crosses in the back of his pickup and asked permission to put them up on the hospital campus. A makeshift memorial was allowed and it grew to gigantic proportions. Then it had to be decided how long to leave it up and what to do with it when it was time to take it down. The hospital didn’t want to be thought of as insensitive.

After a month, the hospital invited the family and loved ones of victims to come and take pieces of the memorial.

5. It took long to identify some victims because some were underage  teenagers who entered the night club using false I.D.s, and others were in the country illegally.

Sometimes fathers of victims became angry with hospital personnel, saying, “You know what’s going on with my son, you’re just not telling me.” (In some cases victims were taken to other hospitals and parents showed up at the wrong place.)

By 8 p.m. that Sunday night, all of the victims were identified except one. That patient was in a coma and not expected to survive. When his mother and father were finally discovered and brought to him, his mother ran to the bed, put her head on her son’s chest and prayed for him.

A week later, the son was off his ventilator. Two weeks later, his sight and hearing had returned. Two weeks after that, he could speak in both in Spanish and in English. Today he can walk.

The hospital made a decision to hold all bills for these patients and wrote off any medical expenses that would have come out of their pockets.

Strong then asked those first responders and hospital personnel who were present for his presentations, “Are you prepared for what you can prepare for?” Orlando has a population of 2.3 million. But a single shooter opening fire in a crowded location can happen anywhere. “If you don’t have a good relationship between the hospital and EMS, get one,” he added. “To me, that’s the most critical.”