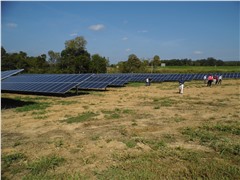 Citizens Electric was part of a dedication ceremony of a new solar energy generating station in Ste. Genevieve last Wednesday.

“We turned a bean field into a solar array,” said Van Robinson, CEO of Citizens Electric Corporation. “The system is on now.”

The 2,000 solar panels collect energy from the sun’s rays and transmit direct current (DC) to nine inverters that change the energy to alternating current (AC). From there, the electricity passes through a transformer and is added to the power grid. From there, “it goes anywhere it needs to go. There is no significant storage on the grid. It flows where it needs to go” said Robinson.

It is expected that in the middle of the afternoon, when sunlight is at its peak, the solar generating station in Ste. Genevieve will produce 500 kilowatts of electricity. The solar panels will produce  enough electricity to power 500 homes a year.

The panels require little maintenance. Rain will wash off any dust that accumulates. Hail should be deflected without hurting them because of the angle of the panels. However, the solar panels are so close to a golf course that golf balls have made direct hits and have damaged three panels. Because the panels are connected to each other, when one panel goes down, it causes 19 other panels to go down with it. When panels fail, such as those struck by golf balls, they must be replaced.

The life expectancy of the panels is 25-30 years. The inverters (there is one on each row of panels) are expected to last 10 years.

The new Ste. Genevieve site is one of three identical-sized solar generating stations that were built for a total of $2.5 million. The others are in Paris, Illinois, and Peru, Indiana.

Customers of Citizens Electric can participate in co-op solar without buying any equipment or installing panels on their own roofs. They pay 99¢ a month to become part of a “community solar system” that allows them to receive the benefits of solar energy without having their own individual solar equipment.

The arrays are actually owned by Wabash Valley Power Association, which is itself a co-op with 23 members across Illinois, Indiana and Missouri. (Citizens Electric is a member of that co-op).

For more information, go to www.powermoves.com/solar.