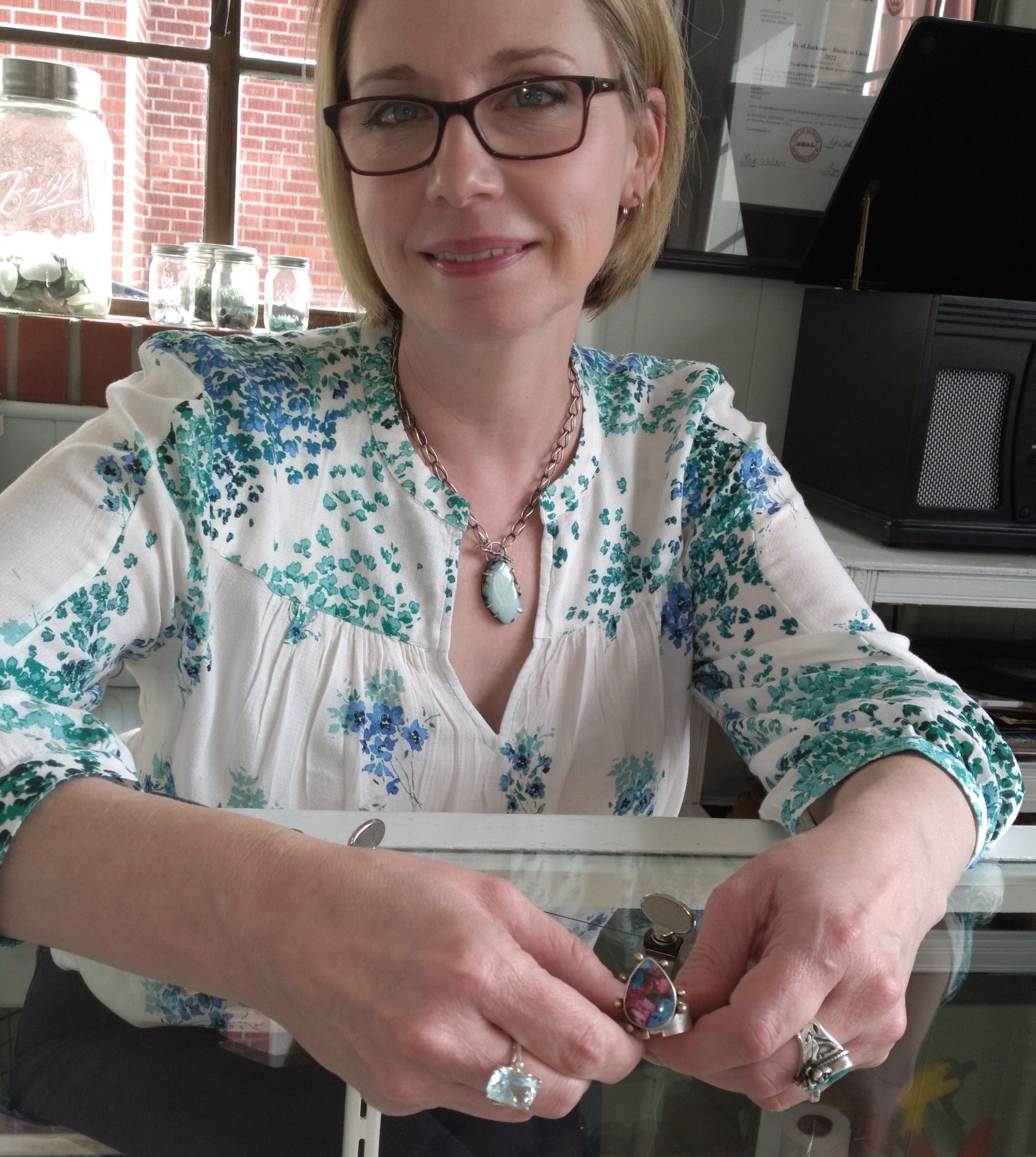 Jewelry at Foxy Lady Stuff, located at 208 S. High Street in Jackson, is handcrafted and designed by Emily Fox of Jackson. Photo by Christine Pagano

What’s exciting about Emily Fox’s story is how her career in ultrasound segued into jewelry making. Finding a pebble of sea glass on Lake Michigan near Racine, WI, during a family trip pretty much changed her life. “The pebble was glowing,” she said.

Fox had always looked for sea glass but was never successful in finding it. Once she found that first stone she thought, “Is this legit? Can this even be real?”

With excitement and motivation brimming, Fox immediately put her jewelry making into action upon her return. “I went to Goodwill, chose a silver plated bracelet, popped out a fake stone and popped in the sea glass. It was terrible, the silver came off,” she said.

But, that first attempt served as the catalyst to her continuing jewelry adventure that she ever expected to evolve into a full time career. She got so good at it that she was asked to sell her jewelry at the New McKendree craft show a few months later. By 2018 she was selling her work at the Osage Centre’s craft show and on Etsy. “I’d never sold anything; Etsy gave me the experience of selling.”

The ability to create aesthetically pleasing objects came naturally to Fox. She had experience from her art classes at Jackson High School, where Fox had received the art award more than once.

Finding the beach glass was therapeutic. She struggled with the tragedy of her dad’s sudden death in 2017. Rowland Allen Fulenwider, her dad, was fatally struck by a truck while crossing Hope Street on foot when returning to his chiropractic office at 208 S. High Street in Jackson – the same location as Foxy Lady Stuff – after having lunch at his home nearby.

The evidence of God changing a mere pebble of broken glass into something beautiful was somewhat of an epiphany for Fox.

By 2019, Fox was creating resin jewelry using flowers her friend Nora Speight had dried. Fox moved on to create leather jewelry and learned the art of lost wax casting, another jewelry technique that added to Fox’s skill set.

Soldering as a means of attaching pieces together, was a skill Fox needed to learn, but fear of the fire and temperatures of up to 1,650 degrees had kept her from learning it. “It was terrifying,” she said.

In her second year at the Osage craft show, she won best of show. By 2020, people were coming to her house to buy jewelry since craft shows were cancelled due to COVID-19.

“In 2020 I opened this shop. I was still doing ultrasound, and my idea was to be open one time every couple of months.”

But doing ultrasound became almost impossible after tearing her rotator cuff after years of repetitive motion. The decision to expand her jewelry making business was the answer.

One of Fox’s talents is an eye for seeing the potential beauty in rough stones. The vision to see the stones cut and polished while mining them is a great advantage.

Fox likes to cut her own stones. Often that means mining them herself because excavators seem to prefer selling them precut. Fox said, “I want to cut what I see in them.”

For her there’s a mystery about the stones. “I love how beautiful they turn out.”

Part of the joy in creation is mining her own stones and hunting for the sea glass she uses in her rings, necklaces and bracelets.

Once the stones are cut in manageable pieces, the final shape is drawn on the stone. Next it is glued to a nail and shaped on a lapidary unit that ranges from 80 to 4,000 grit. The end result is a highly polished stone.

Fox’s experiences in casting, using the lost wax technique, electroforming, silversmithing, enameling, resin, chain making and dabbling in metal clay were self taught. The few classes she has taken helped to expand her knowledge in jewelry making.

Fox has been waiting two years for the opportunity to attend the William Holland School of Lapidary Arts in Young Harris, GA, this August to learn faceting.

COVID-19 was an obstacle that prevented her from attending sooner.

Mining, producing and selling beautiful things she created independently is the result of learning by trial and error plus reinvesting any profit in tools, supplies and classes to extend her learning.

The jewelry at Foxy Lady Stuff is enhanced by the aesthetically pleasing ambiance about the place. But there’s more to the interior than that. It reflects things held dear to Fox. And the space is dear to her. It is where her dad ran his chiropractic practice.

Adjacent to the shop’s main glass showcase is a framed photograph of a little girl, Emily Fulenwider, Fox’s grandmother, for whom she was named. The serene portrait is calming and projects homeyness.

Later on in the conversation, Fox shared that the restful green color on the walls is a match to the color of her grandmother’s eyes and was chosen for the calming effect.

It would not be out of the ordinary for the main glass showcase to contain beautiful handcrafted pieces. And these are special. But, it is the windowsill behind the case where the story of Fox’s journey starts to unfold. Glass jars containing sea glass Fox has collected line the windowsill. The glass twinkles, shines and glows when the light shines on them. Stop by and experience the magic.