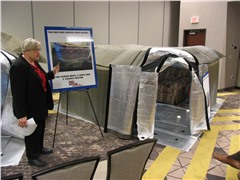 Bed bugs are tiny reddish-brown oval-shaped insects that feed on human and animal blood. When sucking our blood, the abdomens of these 5-millimeter-long bugs extend into a carrot shape. They can drink seven times their body weight in five minutes. That’s the equivalent of humans drinking 120 gallons — or seven kegs!

Bed bugs are hardy. They can live 18 months without a meal of blood. They usually eat about once a week.

Before the 1950s, our parents and grandparents may have encountered some bed bugs in the U.S. Thanks to DDT, the problem of bed bugs was eliminated.

“From 1953 to 2001, there were hardly any,” said Elizabeth Knote, owner of Cape Chemical Co., which operates Cape-Kil Pest Control Co.

DDT was banned in 1972. It took awhile, but bed bugs have returned to the U.S. They were brought here by travelers coming from other countries. Bed bugs can now be found in all 50 states.

Knote knows a thing or two about getting rid of bugs. Besides owning Cape Chemical Company, she has a degree in chemical engineering from Perdue University and has designed pest management solutions for 36 years.

The Bed Bug Baker is essentially two insulated tents, so there is no danger of the heat setting off sprinkler systems. This makes the Bed Bug Baker perfect for hotels, hospitals, schools, homeless shelters, apartments and nursing homes.

At a news conference last Wednesday at the Drury Plaza Conference Center, Knote explained why she wanted to use heat to treat for these bugs. She said chemical treatments kill adult bugs but don’t always kill the nymphs.

“It would take five to six chemical treatments,” Knote said. “With the Bed Bug Baker, it’s one treatment and its over.” Heat kills both the nymphs and the adult bugs.

The inner tent is attached to specially designed plastic tent poles and the outer tent rests atop and around the inner tent. The shiny, aluminized inside walls, ceiling and floor keep 96 percent of the heat inside. This creates a quick heat up time. The double-tent design holds the heat while the surrounding room stays at a comfortable temperature.

The tents are made in Cape Girardeau by R.M. Coco Decor Ltd. “A carpenter makes the poles,” Knote added. Heaters are sold separately.

There are three different sizes available.

The smallest is the Traveler, which is 57 inches wide by 57 inches deep by five feet tall. This can be used to treat small, individual items or groups of items. Schools could use these to kill cockroaches and other bugs that may have crawled into student laptops when they are returned to school at the end of the year.

The mid-sized Lodger model (7.75 feet square by 7 feet tall) was designed to be used in hotels to heat guests’ luggage. Hotels could offer a concierge service to heat luggage so guests do not inadvertently bring bed bugs home.

Hospital staff can use this model to immediately disinfect furniture and patients’ clothing.

At homeless shelters, personal belongings can be encased and heated to prevent infestations.

At schools and libraries, infested books can be encased and placed in the Bed Bug Baker for heating.

At rent-to-own stores, repossessed furniture can be heated in the Bed Bug Baker to eliminate bed bugs. Appliances such as refrigerators and dishwashers can be heated to kill the cockroaches in about 1.5 hours.

Property management companies can heat tenants’ belongings before they move into a new apartment, preventing infestation.

The King Model was designed for on-site treatment of bed bugs. With the dimensions of 10x10x5 feet, two arm chairs, an 8-foot sofa, two queen size mattresses and two box springs can fit inside.

Thermometers with 10’ long sensors are placed in strategic locations. Two heaters are activated, and in three to five hours (depending upon how much is inside), the furniture reaches 122 °F.

While the furniture heats, the pest management professional treats the walls, floor, and wooden furniture (outside of the Bed Bug Baker) with appropriate products. This system works using less energy than a total room heat treatment.

The Bed Bug Baker has been tested at the University of Florida and Virginia Tech.

In the Virginia Tech study of three thermal heat chambers, the Bed Bug Baker had these advantages over other models:

• Fastest heating times of all three chambers evaluated.
• The inner/outer wall design made the chamber very insulated.
• The chamber only requires two circuits and outlets.
• This chamber was the tallest of the three evaluated which allowed for taller furniture to be placed inside.

The Bed Bug Baker has had real world testing too. It has been used on more than 100 jobs, Knote said.

The Bed Bug Baker is available from Bed Bug Battalion, a division of Cape Chemical Co. The phone number is 573-334-3004.