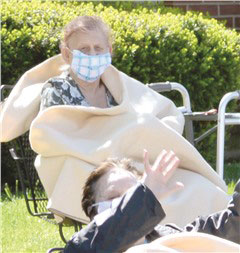 After suffering from a stroke, Mary Barnes recovered in about a month at Jackson Manor Nursing Home. Barnes went through physical and speech therapy at Jackson Manor, but she was unable to recover with family around due to the coronavirus pandemic.

Barnes said that one morning she woke up without the ability to speak clearly and then fell between her kitchen and living room. “When I tried to get back, I couldn’t get up,” she said.

Glenda Francis, Barnes’ older sister, said she received a call from her Barnes when she was still on the floor. “She called me and said, ‘would you call 911, I can’t get up,’ and I told her to call 911,” Francis said.

After taking her sister’s advice, Barnes was helped off the floor by Jackson firefighters but initially refused to be taken to the hospital. Francis said that a couple hours later “she called me and said ‘there’s something wrong’ and said she couldn’t walk.”

Barnes was taken to the hospital where she stayed for four days. Francis said that by the time she made it to the hospital, Barnes was already in care and they would not let Francis see her due to COVID-19 concerns. “We couldn’t do anything,” Francis said. “Couldn’t see her or anything.”

Barnes was told that she needed to leave the hospital due to the coronavirus, but she was advised to not stay alone and receive physical therapy. Francis said her sister chose to go to Jackson Manor because it was about six blocks from her home.

Francis said that because she came from the hospital, Barnes was initially quarantined at Jackson Manor to protect the other residents, and the nursing home remained under lockdown during her stay.

Barnes added that she wouldn’t have been able to recover as well or as quickly as she did without the Jackson Manor staff. “They treated me really well at Jackson Manor,” Barnes said. “The nurses and everybody else were so great.”

“It was kinda hard to under stand how she was doing, because we knew she always tries to make things sound better,” Francis said. “She kept saying she was okay, and evidently, she walked up and down the hall morning to night.”

In her spare time at Jackson Manor, Barnes played bingo daily and got acquainted with everyone in the hall. “I learned everybody’s name, and they were really sweet people,” Barnes said.

Barnes said the highlight of her stay was when she was able to see her family for the first time in over a month, when her family took part in the Secret Family Parade on April 29.

Francis participated in the parade along with their brother, Jim, and several other family members. She said Barnes was not expecting them to show up and was elated to see them.

“She started waving at us and held her hands up to her face and started crying,” Francis said. “We had no more than gotten home till she was calling and said, ‘that was the most wonderful surprise that she ever had.’”

Barnes was able to go home less than a week after the parade, and she said her sisters and nieces have been able to visit and help her out. “I’m very comfortable,” Barnes added.

She did say that she continues to work on her speech, but that she has made a lot of progress and her words are no longer slurred. “I need to practice more,” she said. “I’ve talked aloud to the walls while I was here alone.”