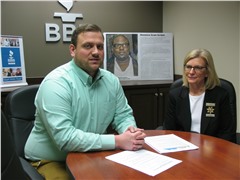 Looking for true love online? Beware! You may end up with a broken heart and a broken bank account.

The BBB released a study on romance scams on Feb. 13 — the day before Valentine’s Day, a day traditionally related to love. It’s titled, “Online Romance Scams: A Better Business Bureau Study on How Scammers Use Impersonation, Blackmail and Trickery to Steal from Unsuspecting Daters.” The author, Steve Baker, has battled consumer fraud for more than 30 years.

Nearly $1 billion in the past three years have been bilked from unsuspecting victims in the U.S. and Canada by scammers posing as lovers on dating sites. There are estimated to be more than 1 million victims around the country. It’s difficult to know exact numbers because victims rarely report the crimes because of embarrassment.

There are more scammers than one might think. One expert estimates that at any one time there may be 25,000 fraudsters online with victims. One company that screens profiles for dating companies says that 500,000 of the 3.5 million profiles it scans every month are bogus.

These scammers “pretend to be someone they are not,” said Keys. They use pictures of other real people on their dating profiles and make up descriptions of themselves that are designed to attract unsuspecting victims.

“For women, they typically claim to be men that are financially stable, such as business owners or professionals that work internationally,” states the BBB report. Often they claim to be divorced with a child. “Bringing the child into the equation seems designed to speak to the maternal instinct in victims, as well as to establish that the scammer is a responsible parent and, thus, presumably a solid potential partner in life.

Having a supposed child can provide the pretext for emergency requests for funds. It is also common for the profiles used to claim a strong religious faith, demonstrating someone with strong values and, thus, solid and trustworthy,” the report states.

Not all victims are women. “Romance scam victims may be male or female, young or old, straight or gay. The common denominator for victims is that they believe in true love, and they believe they have found it,” states the report.

Once these scammers get a victim to respond, they usually try to move the relationship off the dating site, Keys said. Scammers offer love and companionship, and they often send gifts. Next, scammers try to isolate their victims from their friends. Eventually the scammers ask for money. It may be for an unexpected emergency or for airfare. Once they get some money, they ask for more.

Sometimes these scam-mers get their victims to “launder money” for their criminal activities or act as “mules” by shipping stolen merchandise.

“The money loss isn’t the worst of it,” Keys said. “The victims are emotionally devastated.” A number have considered suicide.

The report mentions one scammer who was recently successfully prosecuted by the U.S. Attorney’s Office for the Southern District of Illinois. Olayinka Ilumsa Sun-mola is a Nigerian citizen who ran his fraud from South Africa. His photo bears a strange resemblance to Randy Jackson, a former judge on the “American Idol” TV show. He did not use his real picture on dating sites — instead, he posted pictures of other actual people and often claimed to be an active officer in the U.S. armed forces. He said he was widowed, with one child, and had a strong Christian faith.

Sunmola met his victims on dating sites and quickly moved their communication to Yahoo chat. He spent weeks or months developing relationships with his victims, often sending flowers or chocolates, and then asked for small sums of money for minor emergencies. The women became convinced they were to be married in the near future.

The federal indictment states that Sunmola defrauded at least 30 women in the U.S. They had collectively sent him tens of thousands of dollars.

He convinced one woman, who thought they were soon to be married, to perform in a sexually explicit manner on Skype, which he secretly recorded. When she refused to send more money because she had no more to send, he threatened to post the video online. When she could not come up with the money, he sent a link for the video to her relatives, and threatened to post it for the world to see unless the “highest bidder” would pay him. Sunmola told his victim by phone that when he was done with her, she would want to kill herself. He pledged to ruin her life if she did not continue to send him money. She seriously considered suicide but survived.

Because most of these scammers operate outside of the U.S., it is difficult for law enforcement to catch them.

“We can only go so far,” said Captain Ruth Ann Dickerson of the Cape County Sheriff’s Office. These types of cases are often turned over to the F.B.I. “Their reach is father than ours,” Dickerson said.

To avoid becoming a victim, it is recommended that you do a “reverse image search” to see if the picture being used on a profile is real or came from somewhere else.

Google Chrome allows you to right click on a photo to search for that photo. If that same photo appears with different names, it’s fraudulent.

Pay attention to bad grammar and misspelled words. If mistakes are often repeated, the person may not be from where they claim to be.

Be leary if conversation moves from a monitored site such as social media or a dating site to a private form such as e-mail or instant messaging. It may be a way for a scammer to draw you in without other people interfering.

If you suspect you have become a victim of a scam, you should contact your local law enforcement. Our local agencies have formed a Southeast Missouri Cyber Crimes Task Force to help fight this and other cyber crimes.

“Many victims are very reluctant to file a complaint,” concludes the BBB report. “Filing a complaint, however, may help prevent someone else from being defrauded because most fraudsters have many victims. As noted, Sunmola was dealing with at least 30 women. Victims should report these crimes to their police department, IC3.gov, FTC.gov, F.B.I., Department of Homeland Security and BBB. Also report fraud to any Internet dating sites in which they ‘met’ their scammer. And report [the scam] to Western Union, Moneygram, their banks and any other financial accounts used.”