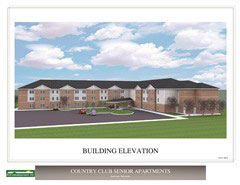 No one from the public spoke at a public hearing on proposed property tax rates at the Aug. 15 Board of Aldermen meeting.

Tax rates are set to produce revenues which the budget says are required from property tax. Each tax rate is determined by dividing the amount of revenue permitted by the adjusted current year assessed valuation. The result is multiplied by 100 so the tax rate is expressed in cents per $100 valuation.

• Voluntary annexation: No one from the public spoke at a public hearing on the voluntary annexation of two properties: 337 and 355 Timber Lane (Grandview Acres), as submitted by Silver Key Properties, LLC. The Board took no action on this item.

The apartment complex will be known as Country Club Senior Apartment Complex.

The City supports the project because it supports economic development and promotes affordable housing, the resolution states. Local contractors will be used for the project, benefitting local development.

• Recruiting retail: During study session, the Board of Aldermen heard a report from Jason Claunch of Catalyst Commercial Inc., a retail recruiting consultant who was hired to study what kind of retail opportunities could be brought to Jackson.

Claunch presented an overview of how he collects data and analyzes the county using traffic counts, existing commercial areas, average income of the population, etc. Claunch looks at a wide range of potential customers to determine who would shop in Jackson.

He will then put together a report that he will market to retail companies, trying to get some to move to Jackson. “Only certain retail opportunities match our community,” said City Administrator Jim Roach.

After a month or two of analysis, Claunch will take the next step and actively recruit retail businesses to come to Jackson.