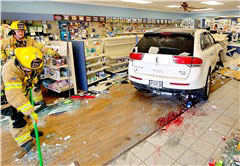 Kyle Rhymer was working behind the counter at Jones Drug Store at 1:11 p.m. last Wednesday when there was a loud crash, glass flew and ceiling tiles started falling. He thought the building was collapsing, so he ran toward a back door. At 1:12 he dialed 911 on his phone.

Gail Howard was helping a customer at the counter in the back of the store when she heard the crash and looked up. A large white Lincoln MKX crossover roared at high speed through the front door and windows, shattering glass. It knocked aside two metal shelves filled with medicine and crashed into the counter just to her right.

Her memory of the crash, which happened in split seconds, replays itself in slow motion in her mind.

Howard screamed to coworker Danae Walter, who was working at the upper counter, behind Howard and to her right. She “Had her head in the computer screen,” Howard said. The car was aiming right for her and Howard didn’t think it was going to stop.

The front of the lower counter (where Howard was) pitched upward and backward as the car kept coming. A swinging door at the end of that counter, pointing straight backward, was pushed back through metal shelves, bending them out of shape. The wooden pegboard behind the shelves bent, but the wall behind the pegboard held firm. The car came to a stop.

Amazingly, no one was hurt.

The driver of the vehicle had pulled up outside the drug store, intending to purchase some corn pads for her feet. According to Brian Thompson, owner of Jones Drug Store, and firefighters investigating the crash, she apparently had a medical condition that caused her to black out. Her foot pushed the accelerator to the floor. Her car jumped the curb and crashed through the front door and front windows of the store, taking out a main support beam. When the car hit the lower counter in the back of store, her foot may have slipped off the accelerator. The wheels stopped spinning. Skid marks remain on the tile and wooden floor.

Red liquid oozed across the floor near the vehicle. It was  cough syrup, not blood. When Thompson shows pictures of the crash to curious customers, he’s careful to explain the red stains on the floor.

There were not many customers in the store at the time of the crash, and the car took an angular path — the only path that it could without hitting anyone, said Howard. The timing of the crash was perfect as well — no one was in its path at the moment it plowed through the store. “Thirty seconds one way or another and someone would have got killed,” she added.

Highway Patrolman Joe Weadon heard the crash from his office next door and came running. Within seconds of the car coming to a stop, he helped the driver get out of her car. She was dizzy, but unhurt. She was sent to a local hospital as a precaution.

The store “looked like a war zone,” recalled Howard. “Glass and beams were everywhere.”

Items from the shelves that were hit by the car were scattered everywhere. Some products were unhurt and could be put back on shelves. Others were destroyed by the impact, Rhymer said.

Jackson Fire and Rescue and the Jackson Police Department responded within minutes and secured the accident scene.

A tow truck arrived, and its driver was able to back the car out of the store into the street.

Wooden two-by-fours were brought in to shore up the building where the support beam had been taken out, and plywood replaced the broken windows until permanent repairs can be made.

Yellow police tape was put up outside the store and customers continued to be served by approaching the tape. Store employees brought their items out to them. “We never shut down,” said Howard.

Thompson said the old building was pretty sturdy to survive this crash. Empty apartments above the store and the basement below were undamaged. He now knows for sure that his floor can hold the weight of a vehicle.

This was not the first time a car has plowed through the front of the building.

Back in February 1998, Howard had been working at Jones Drug Store for three years, when a Chrysler New Yorker came through the front window.

At that time, Howard had a desk up front, right in the path of the car. She ran toward the back of the store and wondered why shelves were passing her by. She had her back to the car and did not see it bearing down on her. That car stopped after coming through the window; it didn’t make it all the way to the back of the store.

This time, she was facing the car as it roared through the store and stopped in front of the lower counter, just to her right.

Having this happen twice in one lifetime is enough. “I hope I’m not here for any more,” she said.