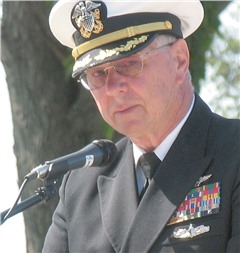 Patriotic music filled the morning air and small American flags waved in the breeze next to tombstones of veterans in the City Cemetery as Jackson celebrated another Memorial Day celebration.

Following a half-hour of foot-stomping marches and other patriotic music performed by the Jackson Municipal Band, Kevin McNeel, commander of American Legion Post 158, reminded those gathered that Memorial Day was not for those in active service; they had Armed Forces Day on May 20. It’s not for those veterans in attendance who are no longer active duty; they are honored on Veterans Day Nov. 11. This day is to remember veterans who have died.

A special tribute was given to soldiers from World War I, which America entered a century ago. A banner was displayed, the guest speaker spoke about local service men and women in that conflict, and their names were read aloud as a bell tolled for each one.

Lawson Burgfeld, a retired U.S. Navy commander, was guest speaker. He said World War I was fought with new technology — tanks, machine guns, U boats and airplanes — but with battle tactics from Napoleon. As a result, there were great numbers of casualties. For example, after six months of fighting at Vedun, France, 700,000 were lost and there were no territorial gains. The British stormed the German lines with 100,000 men; 20,000 died in one day and not one reached the German lines.

Burgfeld brought the battle home by mentioning the statue of the “doughboy” (as U.S. soldiers were then called) on the courthouse lawn. The statue is 16 feet tall to honor 16 soldiers from Cape County who died in battle. It was dedicated May 30, 1925. It currently is being refurbished by the American Legion and will have a new sidewalk leading up to it.

The 40 veterans whose names appear on the base of the statue had their names read aloud, accompanied by the toll of a bell for each one, for the first time since 1925.

Everyone in attendance was invited to the American Legion Hall for a free continental breakfast provided by the Women’s Auxiliary as the ceremony ended with a flyover by a military training aircraft, a demonstration by the firing squad of the Cpl. Mason O. Yarbrough Det. 1081 Marine Corps League, the playing of “Taps” by band members, and the retiring of the colors by the American Legion Honor Guard.