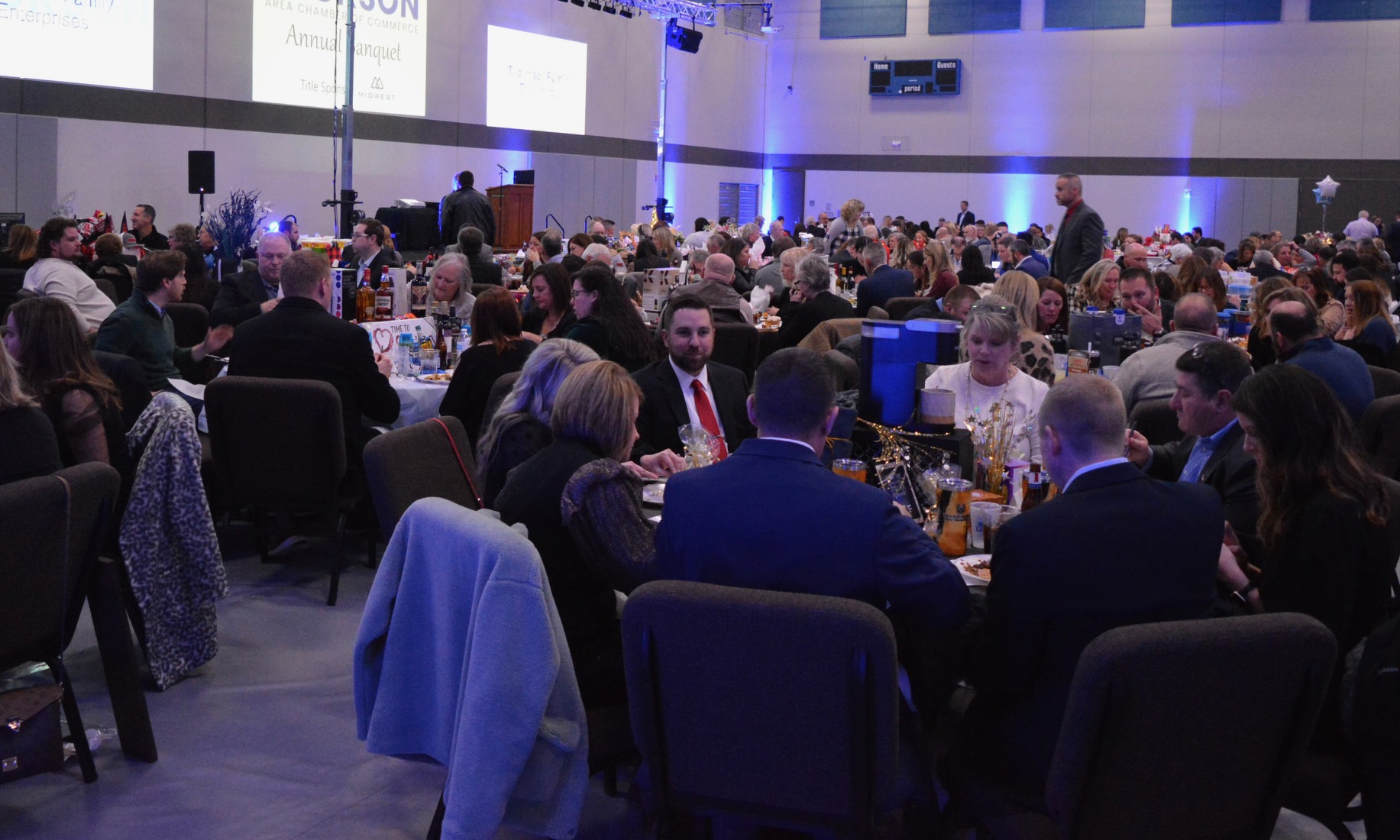 The Jackson Area Chamber of Commerce held its annual banquet at the Jackson Civic Center on Friday, Jan. 13, honoring businesses and leaders in the Jackson community.

Chamber of Commerce President Brian Gerau said more than 500 members were in attendance at the banquet, which was sponsored by Midwest Sterilization Corporation.

Julie Rushing was named the 2022 R.A. Fulenwider Meritorious Community Service Award recipient. The award is given to an individual who has dedicated their life to the advancement of Jackson and past recipients of the award choose each year’s winner.

John N. Thompson, who won the Fulenwider award last year, presented this year’s award to Rushing. “Our award recipient this year is extremely dedicated to our schools, her church and is a strong volunteer both locally and overseas,” Thompson said in his introduction.

Rushing, who works for Jackson R-2 School District, has been a sponsor of student council for the past 15 years. Rushing said she likes working with young people bothin her role at Jackson R-2 and as a member of New Mc-Kendree United Methodist Church.

“When I was growing up, my parents were always givers. I married Todd, and he and his family are givers – so it’s easy to get involved with the community in Jackson and to give back and set those examples.”

Rushing said she was touched and humbled to receive the award, adding that it is the people and the community around her that led her to be honored with this award.

The Business of the Year award was given to Langford Mechanical and Sheet Metal.

The HVAC and plumbing company has been family-owned and operated since 1974. The award was presented by Tyson Schoolfield of Robinson Industrial, Heavy and Commercial Contracting.

“Being selected as the business of the year through the chamber is a huge honor,” Langford President Brian Dameron said. “I was not expecting it. It means a lot to our company, and it means that we are doing something right for the community.”

Dameron said the company currently has 30 plumbers and pipefitters on staff, as well as eight sheet metal workers. As a service-related business, he said his staff is integral to serving their customers throughout southeast Missouri.

“Businesses have highs and lows,” Soto said after accepting the award. “This is the highest of highs.”

Soto said he joined the chamber as a small business to be a part of something bigger. “Year after year, I see all these outstanding businesses receive this award and for me to be one of those is truly humbling,” Soto said.

Soto thanked his wife Joyce Soto for supporting him from the moment he started the business and his past and present employees at SOTO Property Solutions. “I would not be here if it weren’t for the fact that I’ve had some great employees,” he said.

Angel Klund, a counselor at Jackson Junior High School, received the Mary-beth Williams Educator of the Year award. Klund, who was presented her award by Linda Puchbauer, has been a school counselor for 20 years and has been working in the Jackson School District for the last 15 years.

Klund said she loves helping students navigate difficult social situations, as well as being there to listen to them. “Every teenager is trying to gain independence and figure out who they are,” she said. “I am honored to be a part of that part of their lives when they are trying to figure out some big things.”

Klund said that in addition to her role as a counselor, she is involved in the community by volunteering at sporting events and concession stands.

This award, which was presented by Saint Francis Healthcare System President and CEO Justin Davison, is given to highlight someone who is involved with chamber events and helps recruit new members for the chamber.

“Receiving the ambassador of the year award for the Jackson chamber is super special to me,” Loughary said. “To know that my peer recognize how much I love being involved in the chamber and attending all the events, makes me proud of not only myself but the community I get to serve.”

Stephanie Mueller was awarded the WIN Women of the Year Award. Mueller is the co-owner and manager of United Land Title, Mueller Charolais and Mueller Bee Co.

Melody Harpur of Comfort Keepers presented the award, said Mueller has been a major fixture of the Jackson business community. Mueller has dedicated nine years to the chamber’s board of directors and has served on the executive board.

“I appreciate this very, very much,” Mueller said, adding that she loves working with the chamber and the Jackson community.

The 2023 chamber board officers were installed, with Beth Keller serving as president, Laura Findlay serving as vice president and Scott Givens serving as secretary and treasurer.

Matt Huber, Ron Niswonger and Chris Cole were sworn in as the Jackson Industrial Development Company board of directors.