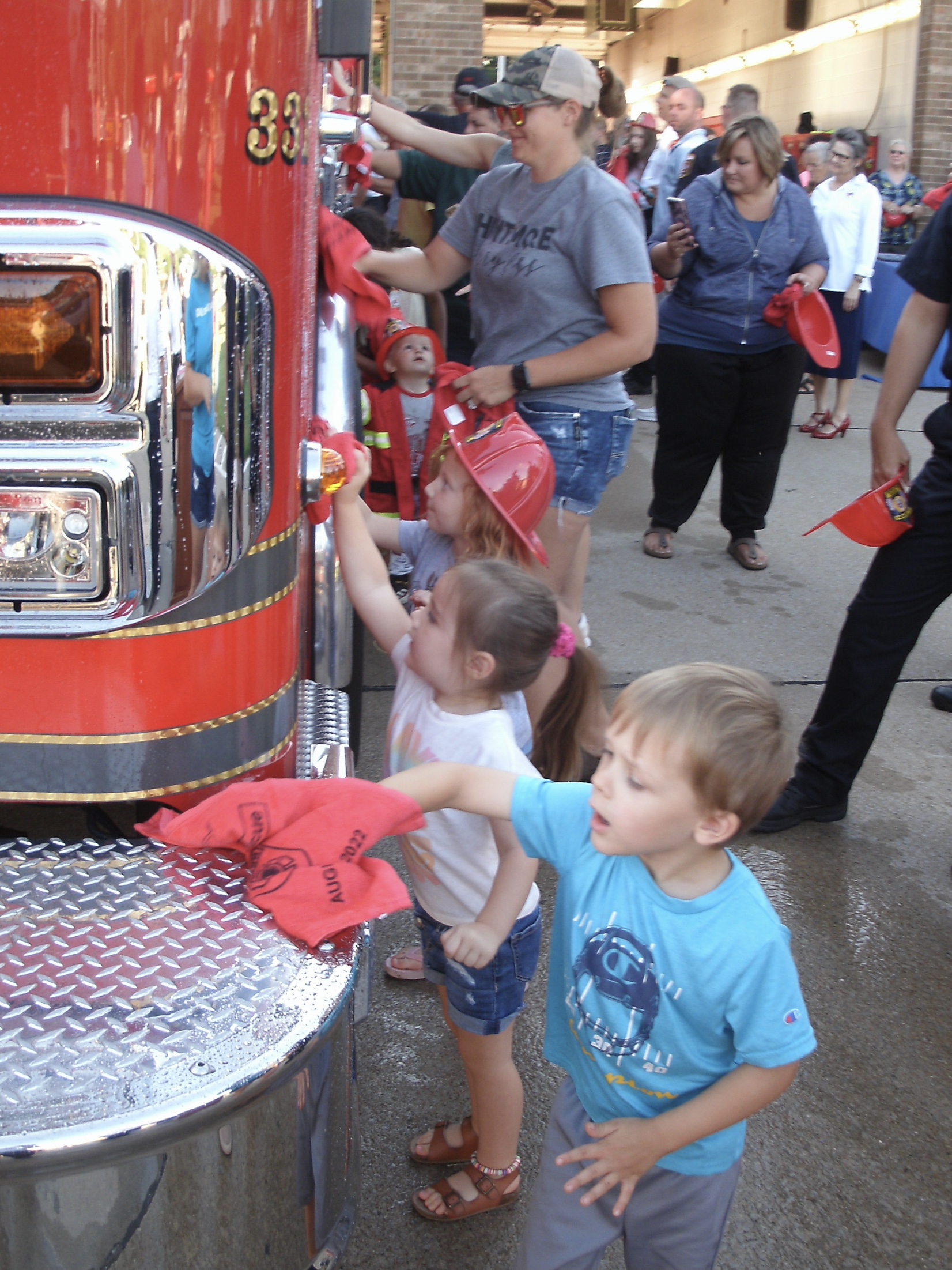 The public was invited to help wipe down the new fire truck with ceremonial towels commemorating the event. Children were especially pleased with the task, including Wyatt Stone, foreground, son of Jackson Firefighter Blake Stone. Photo by Gregory Dullum

It’s not often a small city like Jackson purchases a new half-million dollar fire truck and puts it into service. When Jackson does, it makes a community celebration out of the event.

Last Wednesday evening, about 100 people gathered at Fire Station No. 1 to dedicate Fire Engine No. 13, retire Fire engine No. 11, and honor Deputy Chief Randy Davis for his 40 years of service to Jackson Fire Rescue.

JFR ordered this $550,000 custom-made pumper truck early last year, and it took this long for it to be manufactured and delivered. It was assembled at the Lake of the Ozarks and driven here, so it has a few miles on the odometer.

With Jackson firefighters and staff lined up with their backs against the new truck, Fire Chief Jason Mouser said, “I’d like to thank all of our staff for the wonderful job they do, day in, day out, carrying out their duties and responsibilities for the safety of our community. We can have the greatest equipment, and these apparatus — all the trucks — but if we don’t have the capable, competent, compassionate individuals operating them, it really is for no good. We are blessed to have such a great group of guys here in Jackson Fire Rescue, and I appreciate each and every one of you.”

One team member who was absent from the ceremony was Deputy Chief of Operations Sean Mitchell, who was in the second week of a FEMA deployment with Missouri Task Force 1 in Kentucky searching for flood victims.

JFR is retiring two fire trucks. “One left us a coupleof months ago — a ladder truck that had been part of the department since 1981. It has been a tremendous apparatus for us and has served the city well,” said Mouser. It has not disappeared completely.

The Thompson family purchased it, and it will appear in local parades. “We’ll continue to see that truck for years to come,” said Mouser.

The second truck, which was retired as part of this ceremony, was Fire Engine No. 11, a 1990 Pierce Dash that the City of Jackson is donating to the Career & Technology Center in Cape Girardeau, so a fire-fighting course can be offered there for high school juniors and seniors.

“We’re retiring two fairly old trucks, 32 and 41 years,” said Mouser. “That’s going to leave us with one thing in this department that has served the city and still continues to do so on a daily basis.” He called Deputy Chief Randy Davis to the lectern. “On Aug. 23, in couple of weeks, he’s going to celebrate his 40th year with the Jackson Fire Department,” Mouser announced.

“It’s going to be highly unlikely that anyone will see the amount of changes in the fire service in the City of Jackson that Randy has seen, and continues to see here today. He started in a day where air packs weren’t too much of a thing, you know.”
Air packs, like SCUBA oxygen tanks, are worn by firefighters when entering burning buildings so they can breathe.

“We only had two,” interjected Davis.

“They only had two air packs in the City of Jackson when he started here,” Mouser emphasized. “We’ve shared a lot of stories, and I enjoy hearing about Randy whenever he started in this department and how they ran maybe 50 calls in one year and when he was on duty he would go four months without a call. There would be some lonely 24-hour shifts.

“A lot of those times were spent working on a shift by himself,” Mouser continued. “So I know it’s kind of bittersweet to see those trucks go, because they are the only things that can carry on a conversation with him over that many shifts.

“As a small token of our appreciation, we’ve had a helmet shield made: ‘Jackson Fire Rescue, 40 years of dedicated service, to

State Fire Marshal Tim Bean then presented a certificate to Davis in appreciation of his 40 years of service.

“The fire service is all about tradition,” continued Mouser. “The ceremonial traditions of the wet-down and push-in of the apparatus originated in the early 1800s in the days of the horse-drawn fire apparatus,” he explained.

Fire companies returned to their fire houses after a fire and the horses couldn’t back the apparatus in. Firefighters would wash the apparatus before pushing it back into the fire house themselves.

Captain Justin Farrar drove retiring Fire Engine No. 11 — with its squealing brakes — out of the station and onto the driveway one last time. A hose was attached to it and Captain Davis used the hose wet down the new truck.

Using ceremonial red towels made for this occasion, the public then wiped down Fire Engine No. 13.

Father John Harth, the department’s chaplain, asked a blessing on the new truck and a group of firefighters ceremonially pushed it into a station bay to the tune of the truck’s back-up warning beeps.

Cold lemonade was served by Trinity Mouser, daughter of the chief, as two cakes were cut and served by Administrative Assistant La-Donna Glenn and Julie Mouser, wife of the chief. One honored Davis for his 40 years of service, the other commemorated the dedication of Fire Engine No. 13.