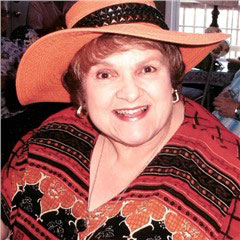 Deanna Long of Jackson died June 26, surrounded by her family. She was 74.

For many years, she contributed articles to The Cash-Book Journal. One article, “Restaurateur brings new meaning to the word ‘retirement,’” was published Dec. 28, 2011. It described the opening of Jackson’s Hickory House Restaurant. A framed copy hangs on the wall inside the door of the restaurant.

Deanna was as dedicated to ensuring the safety and well-being of the children of Missouri. She loved her career and was proud of her work with the State.

“She worked for the State for 38 years,” said her husband, Jim. During the last five years before she retired in 2008, she wrote rules and regulations for daycare centers.

She was a past honoree of the Cape County Business Woman of the Year.

Jim has enjoyed riding motorcycles ever since he was big enough to climb on one. He started racing when he got out of high school. “In the ’60s, I raced flat track,” he said. During their 47 years of marriage, Jim took trips around the country on his motorcycle.

“I crashed in Wyoming 12 years ago,” recalled Jim. He lay on the side of the road for hours before someone stopped to help him. He was surprised that, when he was well enough to ride again, Deanna let him buy another bike. He bought a full-sized trike, which is what he still rides today.

Deanna liked to go along on motorcycle trips, but after awhile, she became so overweight that it was difficult for her to ride, so she quit, he said.

Deanna enjoyed bowling, and bowled in the senior leagues. However, after fracturing her hip, her mobility decreased. “She went from a cane to a walker to a wheelchair,” said Jim.

She longed to be active and mobile again, Jim said. To help her lose weight, she hired a physical trainer.

“Her goal was always to ride with me again,” said Jim. She did this past Monday. Her ashes encased in a brass box, Deanna traveled by motorcycle from her Memorial Mass at Immaculate Conception Catholic Church to Russell Heights Cemetery.

Jim originally made the square brass box years ago as a hobby. He was upset when Deanna took it from him, removed the cover and turned it into a planter. He took it back.

He has long since forgiven her. Today, the brass box has its lid, and it contains Deanna’s remains. Wiping a tear from his eye, Jim stated, “Now, she’s reclaiming it.”