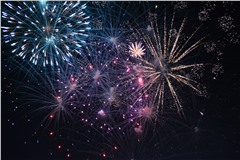 Our nation is turning 243 years old July 4. Celebrate our country’s birthday with a fun-filled day in Jackson City Park.

The remainder of the activities are in Jackson City Park.

Mud volleyball begins at 8 a.m. and runs throughout the day.

Also beginning at 8 a.m. are helicopter rides on Legion Field.

At 9 a.m., the car show begins and the food stands and Jackson Elks Lodge No. 2652 beer garden open for business.

At 11 a.m., the duck races begin at the foot bridge on Hubble Creek. The first 10 ducks to cross the finish line win fabulous prizes with the grand prize being an evening for eight at the Oliver House including dinner and entertainment. Ducks may be purchased at High Street Station prior to the race. Proceeds benefit the Jackson Heritage Association and the Oliver House Museum.

At 4 p.m., there will be a golf ball drop. A helicopter will drop golf balls on the softball field that has sponsor flags on it. If a golf ball you purchased lands closest to a flag, you win that sponsor’s prize. Balls will be sold in the park until 3 p.m. This event is sponsored by the Uptown Jackson Revitalization Organization.

As the sun begins to drop toward the horizon, enjoy the Shades of Soul performing at the Leist Band Shell at 7 p.m.
This performance will be followed by the Jackson Municipal Band.

As the sky darkens, at 9:30 p.m., the fireworks will begin. Because trees in the park have grown over the years, this year’s fireworks will be shot 100 feet higher into the air to make them more visible.