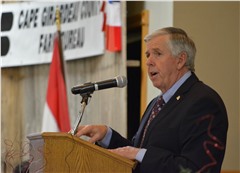 “This is the first major event I’ve spoken at since I’ve become the 57th governor of the State of Missouri,” Parson said.

Parson, who is a cattle farmer himself and grew up on a dairy farm, spoke about the role agriculture has had in Missouri and how he hopes to help the industry grow. “It’s not hard for me to be passionate about agriculture,” Parson said.

He mentioned that Missouri agriculture employs 400,000 people and more than 100,000 farms cover two-thirds of the state’s land.

“We need to do everything we can to sustain our number one industry in the state of Missouri and make sure it is thriving for the future generations,” Parson said.

Parson recently hosted agriculture leaders from across the state at the Governor’s Mansion for a working dinner, which hasn’t happened for the past 30 years. Parson said they were able to “restart the clock” and hopefully won’t wait another 30 years to meet again.

He had also recently signed an executive order granting drought relief to farmers in 49 counties. Parson joked, “When I signed that executive order, it rained down home.”

Parson said he has also started working to form trade partnerships with secondary countries the state hasn’t previously “tapped into.” While he couldn’t promise a deal, Parson said they are currently in “strong negotiations.”

Parson, who recently met President Donald Trump in Washington, D.C. and Vice President Mike Pence during his trip to Missouri, said he hopes to use a strong relationship with the federal government for the state’s advantage.

During a luncheon in Washington, D.C., Parson sat next to the president and was able to talk to him about agriculture, infrastructure, workforce development and tariffs. Parson said, after his meeting, that he believes the president “does wish what’s best for our country” and “stands up for what he believes is right for America.”

Parson said he thinks Missouri can grow to become one of the top states in the country — “We are in the middle of the United States of America and we have every opportunity to expand who we are.”

The governor said he was able to live the American dream and so have most of the people in that room. Parson added that his conservative values run deep and he’s not a fan of handouts, but he is more than happy to give the tools needed to be successful.

“The most important thing I want to do as the governor of the State of Missouri is pass down to the next generation the same opportunities that I have and give them the ability to be successful,” Parson said. “I want to work for them — I want them to love this state like I love this state.”

During the meeting, the Farm Bureau recognized the Cape Girardeau County government for earning the Agri-Ready Distinction from Missouri Farmers Care.

Luella Gregory of Missouri Farmers Care said the distinction hangs a “welcome sign” for agriculture businesses. “It shows our community leaders and our residents that agriculture is important, it’s vital to our state and that we want to encourage agriculture business and growth,” Gregory said.

Cape Girardeau County is one of 57 counties with the distinction.

Mark and Lisa Reitzel received the “Friends of Farmer” Award. The couple owns a farm and raises cattle in Whitewater. Lisa is the public administrator for Cape Girardeau County and Mark has served on the Cape Girardeau County Soil and Water Conservation District Board. Scott Jahn, who introduced the winners, said they were both active in the community and hard working in everything they do.

Joseph Landewee was awarded the 2018 Cape Girardeau County Farm Bureau Scholarship. He is going to attend Southeast Missouri State University this fall and plans on majoring in agribusiness with an emphasis in plant and soil science. Landewee was active with Delta FFA and graduated as valedictorian at Delta High School. He also works on his family’s farm.