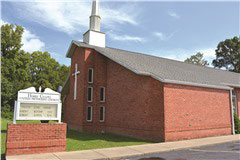 Hobbs Chapel United Methodist Church in Cape Girardeau County is celebrating its 125th anniversary. The church will have a special worship service at 9 a.m. on Oct. 14. It will also host an anniversary dinner, which is by invitation only, but the public is welcome at the service.

In 1993, a fire destroyed the 101-year-old church building. For three years, the congregation worshipped in the activity building while construction on a new building was ongoing. The current church on State Highway 177 was consecrated on June 9, 1996. This will be the first anniversary celebration in the new church building.

The church is currently fairly small, with 75 members, but it has a strong church community according to its members. In 2005, the congregation of Third Street United Methodist Church merged with Hobbs Chapel. Through that process, the church was able to become debt-free.

“One thing this church does well is to make you feel welcome,” Patricia Littlefield said. “When I came here for the first time, it was with some trepidation. I thought I was going to be walking into a place where I don’t know anybody except the pastor, but everybody made me feel welcome.”

Christine Simmons, another member of the church and part of the committee to put on the celebration, said the church is very special to her, and she hopes the church grows to having 200 people each Sunday.

“I want to see the growth of our church for our future,” Simmons said. “It’s a emotional time for us because we don’t have a bunch of young kids in our congregation. We do have 10 to 12 young kids, but we are trying to do things to attract young people.”

Every Sunday, the church has doughnuts after worship, and once a month the church family comes together for a potluck. The church also hosts third through 10th grade students from Prodigy Leadership Academy.

Simmons said the church has seen many changes over the years, but the fact that it has weathered those changes is worth celebrating. More than 25 ministers have served Hobbs Chapel over the 125 years, and changes are still coming. The church just installed new flooring and had its walls newly painted in time for the anniversary.