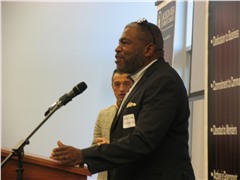 “We have the incoming chairman of the board of the Missouri Chamber of Commerce with us today,” continued Gerau. He then introduced Dennis Vinson, president of Signature Packaging in Jackson and a JACoC member.

Vinson will be installed Nov. 16 at Busch Stadium in St. Louis.

Being selected for this honor doesn’t happen without the support of local businesses, schools, etc., he added.

“We’re going to take a big contingent up to St. Louis,” he concluded. “We are extremely excited.”

The business breakfast was sponsored by First State Community Bank. The theme was set around the eclipse with such offerings as Sunny D orange drink, crescent roll sandwiches, Moon Pies and cookies baked in the shape of the sun and moon.

The Jackson R-2 School District presented a program. Director of Communications Merideth Pobst asked the audience to consider donating $6.50 (approximately the cost of a specialty coffee) each week to pay for a backpack filled with food that needy students can take home on Fridays. The Friday backpack program has been renamed “Jackson R-2 Power Packs.”

Pobst also encouraged businesses with free Wi-Fi to put a window cling in their front windows to tell students (who don’t have Internet access at home) that they are welcome to visit their establishments and use their free Wi-Fi to do their school work.

Pobst introduced Terry Gibson, the District’s director of finance, who started July 1. Gibson will report to Associate Superintendent Bleau Deckerd, who will no longer handle day-to-day financial matters, but will oversee transportation and facilities (in addition to finances) following the retirement June 30 of Jeff Bollinger.

Gibson formerly worked for the Kansas City Chiefs, the Kaufman Foundation and Jeff Baer (an accountant firm). His wife took a job with Saint Francis Medical Center in Cape Girardeau, so they moved here from Kansas City. “Whenever you’re married, you go where your wife wants to be,” he said.

He is thrilled to be working for Jackson R-2. “Everything came together,” he said. “I had the experience to help the District do what it wanted to do. It has been tremendous to be part of this. This School District receives community support that is pretty well unmatched. This is not to be ignored. This is to be appreciated.”

Three school principals, Jessica Maxwell of East Elementary, Samantha Trankler of West Lane, and Lance McClard of North and Millersville, gave short talks about what was happening at their schools.

Maxwell said being principal of East as it opened three years ago was a “once-in-a-lifetime opportunity.” She student enrollment in the District was continuing to increase and gave credit to the District staff who provide excellent education.

McClard mentioned that students are being taught to leave “a positive digital impact” as they work on computer equipment and have access to the Internet. They also are being taught to give of themselves. “We want our students to be well-rounded and give back to the community,” he said.