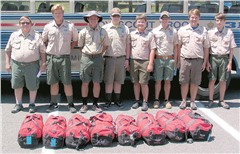 How does six days of sailing the blue inland waters of the Bahamas sound? What if you had to do all the work of operating the sailboat, fixing your own meals and catching fish to supplement the menu? What started out as a relaxing vacation has turned into a high adventure!

Boy Scout Troop 311 left Jackson Friday for this high adventure. Most of them have never been out of the country and some have never been on a plane until now. “It’s a chance to get to do stuff you might not get to do with your family,” said Scoutmaster Stephen Mills, one of the three adults accompanying the nine scouts, aged 14-16.

A Boy Scout bus took them to St. Louis, where they boarded a commercial jetliner to Miami, FL. There, they transferred to a smaller plane that took them to the Bahamas, a group of 700-plus islands and cays in the Atlantic Ocean east of Florida.

The Scouts must be at least 14 to attend a high adventure. “We try to do one high adventure a year,” Mills said. For this adventure they needed passports. “My son has his passport before I do,” said Angie Brown, mother of Andrew Fields, one of the scouts.

Although food is provided, the scouts will supplement their menus with the catch of the day.

Mills said the captain is famous for catching conch (those large tropical mollusks with spiral shells), slicing them up and cooking them.

For six days and five nights the scouts are sailing from cay to cay, fishing and snorkeling. Cays are small islands or reefs of coral, rock and sand. “Every place we go has a little settlement and we’ll get off the boat,” Mills said.

At night, there are sleeping accommodations below deck. However, the scouts brought sleeping mats with them, so if the weather is cooperating, they are sleeping on deck under the stars.

To prepare for this trip, some of the scouts took swimming and snorkeling lessons.

The trip is relatively inexpensive, at $1,500 per scout. That includes air fare, the sailboat rental and meals for the six-day sail and two days of flying there and back.

To raise money for this adventure, Troop 311 held fund-raisers for the past 18 months. They sold pork butts, set up a stand at the 100-mile garage sale and checked groceries at Country Mart.

“I helped raise the money, but I don’t get to go,” jested Brown.

Stephen Mills invited his brother, Gregory Mills, and his son, Levi, to go with them. They are part of Scout troop 967 in Leadwood. The bus picked them up on the way to St. Louis. “We get charged the same amount if we have fewer people, so we try to get 12,” Stephen explained.