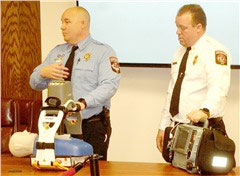 LUCAS is new to Jackson Fire and Rescue, and what a welcome addition! LUCAS has helped save lives during cardiac arrests. LUCAS is not a new employee; it is a new portable device that performs CPR on a nonstop basis, freeing up a first responder to handle other duties.

LUCAS and other new equipment to help in cardiac arrest cases were demonstrated by Fire Chief Jason Mouser, Deputy Chief Sean Mitchell and Captain Ryan Davie during the Jan. 4 study session of the Jackson Mayor and Board of Aldermen.

Jackson Fire and Rescue has three LUCAS devices; one in each fire station and one is carried in a chief officer’s vehicle. They cost $15,000 each and were purchased with CARES Act funds.

JFR also has two new cardiac monitors that cost about $25,000 each. They were purchased with city funds; they were budgeted items in 2020.

“It sounds like a lot [of money] but two to three weeks ago, an event happened that we deployed these devices and somebody got to go home [from the hospital] several days later,” said Mouser. “So in my mind, they have already paid for themselves.”

“We had these [LUCAS devices] on our trucks and in use for about three months now, not quite four months, and I’m going to say we have probably used them over a dozen times already,” said Davie. “These things are incredible. Once we start the device, it’s not taken off until there is no outcome or when they get to the hospital and emergency staff at the hospital takes it off. It does good enough compressions that people will actually start waking up, moving their eyes and their hands, but they are not actually alive yet.”

When firefighters train in CPR, one firefighter does chest compressions for two minutes and then is replaced by another, because it is exhausting work. LUCAS never tires. And it frees up the firefighters who would normally be doing CPR on the scene to do other things, such as calm down family members.

The device runs on batteries. Each device has two batteries that last about an hour each. “The longest we have run one of these devices is about an hour and 20 minutes.” Davie said.

A third new device called an I-O can administer medicine to restart the heart. A miniature drill puts the needle into the bone marrow of a shoulder (or just above the knee cap). When an IV is placed in a vein in a patient’s extremity, it takes about a minute for the medicine to reach the heart. With the I-O in the shoulder, the time is cut to five seconds.

LUCAS devices go with the patients in the ambulance to the hospital. A member of JFR goes with the device, to monitor it and make sure it  continues to work properly. He also makes sure the device is returned once it is no longer needed at the hospital.

One resident on Clover Drive said he had no objection to the rezoning.

The Board of Aldermen later unanimously approved the rezoning.

Also, a public hearing was set for 6 p.m. tonight, Wednesday, Jan. 20, to consider abandonment of a portion of an access and parking easement in Skinny’s Subdivision, as requested by CZL Investments. LLC. The abandonment is being sought for Blazin’ Car Wash to put up a sign in the Century 21 parking lot near Walmart.

• Meeting date change: The Board of Aldermen meeting for Monday, Feb. 15, was moved to Wednesday, Feb. 17, because of the Presidents’ Day holiday.

• Concrete work: A $16,954.39 change order was approved to Mike Light Cement Finishing of Perryville for work on the Annual Concrete Pavement Improvement Program.

• Limited use resolution: The Board approved a resolution allowing the property owner at 320 E. Jefferson St. to keep his paved driveway on a portion of the South Georgia Street public right-of-way.

• Electric Substation: During study session, the Board discussed an engineering services proposal to build an electric substation near South Old Orchard Road. The substation is needed to provide electric service to the east side of Jackson near I-55. It will be 18 months to two years before it is operational. Formal approval will be considered at tonight’s Board of Aldermen meeting.