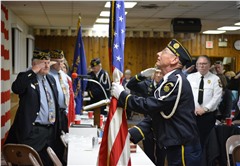 The organization has evolved into one of the most influential nonprofit organizations in the country, with over two million members and 13,000 posts today. The Altenthal-Joerns Post 158 in Jackson was dedicated in 1922, and has been continually active in the area.

Jackson Mayor Dwain Hahs presented a proclamation stating March 21, 2019, as American Legion Centennial Day. He stated that the organization has been able to better the community through its work with Jackson Homecomers, Boys State, American Legion Baseball, local scholarships, placing flags on veterans’ graves on Memorial Day and the posting of colors at community ceremonies.

During the event, the organization presented awards to several community members and businesses for their work in Jackson.

Jackson Police Officer Danny Brosnan was recognized as the American Legion Officer of the Year. Lt. Alex Broch gave out the award and said Brosnan was chosen for “his strong work ethic and his proactive approach to serving and protecting our community though a number of different ways.” Brosnan is a Marine Corps veteran who joined the Jackson Police Department in May 2018.

The organization also presented an award to firefighter and EMT Justin Farrar, who has worked full-time for Jackson Fire and Rescue since 2010. Farrar is a member of the swift-water rescue team. He has been deployed to various locations, including Texas in the aftermath of Hurricane Harvey.

EMT Brad Basler was recognized for his work at Cape County Private Ambulance Service, and Buchheit was awarded for its work supporting veterans. Shane Kelly was also named Veterans Support Group Person of the Year.

County Commissioner Charlie Herbst thanked the organization for working with the county to provide additional parking for the under-construction courthouse. As part of that agreement, courthouse visitors will be able to use the American Legion’s parking lot during business hours and the American Legion can use the newly constructed county parking lot during evening or weekend events.

Several American Legion guests used parked in the county’s parking lot for the birthday banquet. “It made me feel good tonight to pull into that parking lot and see it was over half full,” Herbst said.

Jim and Pamela Roche presented a lithograph to be placed in the hall that commemorates the centennial. Dinner was served by the American Legion Auxiliary and entertainment was provided by the singing group Joyful Sound.