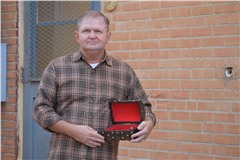 A Jackson woman gave the gift of a lifetime to a man in Texas she has never met.

It all started when Emily Collins found a jewelry box among the items she bought at a Goodwill outlet. Inside the box was a pocket watch that no longer worked, two pairs of cuff links and a class ring.

“It cost 99 cents a pound so it wasn’t very much,” Collins said.

Being sentimental, Collins wanted to find whose it was and try to return the class ring to its rightful owner. The only clues she had were on the ring itself — the name “Ricky,” the year “81” and the school “Holcomb High.”

“First I put it on Facebook with a picture of the ring and asked if someone had any idea of who it belonged to,” Collins said. “I didn’t hear from anybody, so I ended up calling the school.”

Skaggs was surprised to learn that Collins not only had his class ring, but also his family’s jewelry box. His family was one of the poorest families in the small town of Holcomb, and that box was where his family kept their prized possessions until it was stolen in the summer of 1980.

“I told her my story and how I never actually got to see my ring,” Skaggs said.

Although his family couldn’t afford to get him a class ring, Skaggs found out that the Army National Guard Reserve was offering a $1,500 signing bonus to anyone who joined as a junior in high school.

“One of the biggest reasons I did that was to be able to pay for my class ring,” Skaggs said. “That summer we went off to boot camp and I sent mom the $1,500. She got in touch with the school and they ordered my ring.”

The ring was delivered to his family while he was still in boot camp and his mother placed it in the jewelry box. Upon arriving back home, Skaggs was devastated to find out the box had been stolen and his family had to use the remaining money he sent home.

“Here I was back in high school and I did all that for nothing, other than what it did to me to grow me up,” Skaggs said.

Skaggs said as time went on he accepted that he would never see his class ring.

“I just thought that he probably gave it some girl in high school and maybe she didn’t give it back after they broke up or something,” Collins said. “I had no idea that he’d never even gotten to see the ring.”

Skaggs asked her to ship the ring and jewelry box to him overnight to allow him to pay for the box or at least the shipping costs. Collins accepted his first request, but insisted she would send it for free.

Skaggs, who moved to Texas shortly after graduating high school and now works in traditional and student housing, tracked the package and was watching his mailbox to make sure he didn’t miss it being delivered.

“I was just flushed with anticipation of those old memories,” Skaggs said. “I was giddy up to the time I saw the guy drop it off in the mailbox.”

He said that he ran out to get the package and didn’t make it into the house before he opened it.

“As soon as I saw my ring, I just started crying,” Skaggs said. “You are talking about 37 years ago, but the jewelry box just leaped back into my memory.”

Skaggs said the ring still fit after all that time, though he plans on having it sized up a half size. He will keep it on a chain until that is done. He sent Collins back a necklace and a thank you note.

Both Skaggs and Collins say they have formed a lasting bond with each other, despite never actually meeting.

“I hope to meet him someday,” Collins said. “It was a good deed, and I’m so glad I did it. If I ever lost something, I sure would appreciate getting it returned.”