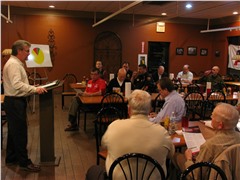 Representatives from the City of Jackson spoke about “Keep Jackson Safe” at the Pachyderm Club Thursday night at Dexter BBQ in Cape Girardeau.

City Administrator Jim Roach, Police Chief James Humphreys and Fire Chief Jason Mouser explained why the City is requesting a 1/2-cent increase in the sales tax on the April 3 ballot.

The measure, if passed, will generate about $1 million a year in revenue dedicated to public safety. It will be used to hire five police patrol officers, a school resource officer, and a fire department training officer, purchase equipment, and make possible a new police station to be built next to the current police and fire complex. The fire department will expand to fill the current building.

It takes two officers to safely handle calls such as domestic disputes. If both officers are busy and another emergency call comes in, the City has to ask for help from the Sheriff’s Office or State Highway Patrol.

Several times in the last two weeks, Jackson’s officers were on domestic calls when another emergency arose. “So far, when we had to call our sister agencies, they were close [and could respond quickly],” Roach said.

Both Humphreys and Mouser mentioned the rising costs of equipping officers. Mouser said a firefighter’s “turnout gear” costs $6,000 each. Air packs cost $8,000 each. “Good equipment makes for a safer community,” he said.

He explained the need for a full-time training officer. “One half of our department has three years experience or less,” he said. Yet, firefighters need to handle more than fires. There are extrications and medical emergencies. “Seventy percent of our calls are EMS [emergency medical] calls,” he said.

A proposed new police station would have 15,000 square feet, which is double the size that the police now occupy in their current building. It is estimated that construction would cost about $7 million and another $1.5 million would be spent renovating the current building as the fire department expands to fill it.

The new building will be paid out of the city’s reserve funds, so bonds will not have to be issued and the city can save finance charges. It is hoped that those reserve funds will be replaced over time.

The sales tax will  be used to fund the ongoing costs of operating the new building and the expanded fire station, in addition to hiring new personnel and purchasing equipment.