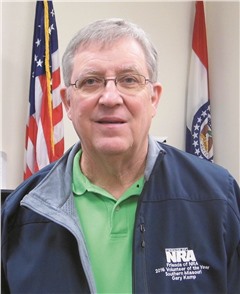 Judge Gary Kamp of Jackson has received a national honor from the National Rifle Association. He has been named Friends of the NRA Volunteer of the Year for the Southern Missouri District.

Friends of the NRA is the charitable arm of the NRA.

There are 54 districts throughout the country. Being named Volunteer of the Year for this district puts him in the running for the “final eight” who will attend the National Convention in Atlanta, GA, April 27-30.

The Southern Missouri District is south of a line from St. Louis to Carthage. “There are 18 or 19 committees in the district,” Kamp explained. “I’m the first person from down in this area to be Volunteer of the Year.”

The local committee plans an annual dinner auction to raise money for grants to local programs. Last year, more than $600,000 was raised. “That’s the best year we’ve ever had,” Kamp said.

Grants have funded 4-H and FFA shooting programs, the Junior ROTC, archery programs in the schools, and the “Eddie Eagle” firearms safety program for children under eight years old.

There are nine members on the local committee. In addition, there are a lot of volunteers who help out at the banquet. “Nine people couldn’t do all the work,” Kamp said.

About 500 people come to the banquet each year. There would probably be more, but that’s all who can fit in the building. “One problem is there are no bigger venues to work with,” Kamp said.

This year’s banquet has been sold out for about four weeks. It will be this Saturday, March 25, at the Bavarian Halle. “We’re one of the few committees that sell out every year,” Kamp said.

Out of five million members in the NRA, only 54 get recognized each year as Volunteer of the Year. No plaque is given out—the winners receive a jacket instead. “Everybody wants to win the jacket,” said Kamp.