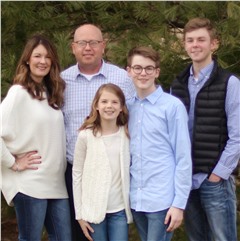 While the coronavirus pandemic has affected us all, the Lipke family has made some tough choices to make sure they are safe during the ordeal.

Ashley and Scott Lipke have moved their daughter Kate, the youngest of their three children, to live with Scott’s mother Sally until it is safe.

Kate was born with hypoplastic left heart syndrome, meaning her left side of the heart is severely underdeveloped. Because of her health condition, she would be a high-risk patient if she contracted COVID-19.

Despite her health being very good, Kate’s 77-year-old grandmother Sally is also considered high risk for the disease because of her age.

Ashley said the move was an easy decision because she is a registered nurse and would still have to be in contact with others for her job. Scott, who is a circuit court judge, is also considered an essential worker and is not able to fully self-quarantine.

“It was hard because I miss her, but it was an easy decision because I knew they would be together and it would keep them both safe,” Ashley said.

For Kate, the move was harder at first, but as she got used to the new routine “it’s not been bad.” She said it took a little while to get used to — not seeing her parents and brothers every day — but frequent FaceTime calls have helped.

“I think the worst part about it is that we don’t know how long this is going to go on, so we’re not entirely sure how much more of this is going to take place – but you just got to keep going,” Kate said.

Ashley agreed, saying the uncertainty has been the most concerning part about this situation. “I don’t know how long it will be before I get to hold my daughter again,” she said. “That’s been the hardest part, the not knowing.”

She added that they Face-Time every night with Kate, as well as deliver groceries and other essentials to Sally’s door. Kate said they sometimes talk through the door when family members make deliveries.

Sally said she misses family dinners but having Kate with her has been a blessing. Sally added that she and her granddaughter have kept busy during this time, with schoolwork, puzzles, egg decorating and reading every night.

Sally and Kate have also sent colored pictures and hand-written letters to nursing home residents. “We have not found ourselves twiddling our thumbs wondering what to do,” Sally said.

The move wasn’t completely uneventful, according to Ashley. She said that during the first week Kate was living with her grandmother, Sally’s 1-year-old dog chewed up Kate’s glasses. “I didn’t know what to do because we couldn’t take her to the eye doctor right now,” Ashley said.

After asking on Facebook, Ashley was able to borrow a neighbor’s extra pair of glasses, which worked well enough until they were able to order new ones that were her exact prescription.

In addition, they had ordered three months worth of Kate’s blood pressure medicine so they didn’t have to worry about running out, and some of Kate’s friends dropped off coloring books and other gifts to keep her occupied during the quarantine.

Ashley added that the transition was helped by the fact that they are staying busy and that they still are in Jackson. “They don’t feel stuck at home, and the memories Kate’s making with her grandma are absolutely priceless.” Ashley said.

Ashley and Scott’s other two children, 17-year-old Parker and 16-year-old Layton, have also had their lives affected by the pandemic and major milestones postponed or up in the air. Parker has had his senior year at Jackson High School cut short, and Layton turned 16 during the shutdown.

Ashley works at Cross Trails Medical Center as a certified diabetes care and education specialist. She said work has changed a lot because of the health crisis, with her primarily doing virtual phone calls to patients.

“We’ve got a good plan in place,” Ashley said. “We are ready to take care of people, and I’m taking precautions as far as when I come home.” Ashley said she leaves her shoes outside, takes a shower as soon as she goes into her home and puts her work clothes directly in the washer.”

Ashley added that besides grocery shopping, they only go to work and come straight home. She stressed the importance of social distancing, saying it’s the only way to make this crisis end and keep people safe.

In addition, everyone in the family has tried to go outside to help their mental health. They delivered Kate’s bicycle to Sally’s house, which Kate rides while Sally is walking the dog or after lunch if the weather is nice. Ashley added that she tries to eat her lunch outside and that the boys have gone on walks in the park and play basketball outside during the shutdown.

One Sunday, the entire family sat outside Sally’s home in lawn chairs – keeping a distance from Sally and Kate, but still getting to see each other. Kate said they played catch and blew bubbles together. Sally added that it helped them all feel normal during this unprecedented time.

“I see all these families that are doing these fun things together and we’re missing some of that because Kate isn’t physically with us,” Ashley said. “But we are trying to think outside the box and find ways to create those family memories even with her being away from us.”

One of the gifts that Kate got from a friend was DVDs of the television show Friends. Ashley said her daughter has been watching the show, and Ashley bought a Friends-themed Trivia Pursuit online for them. The two split the cards amongst themselves, and have played through FaceTime going back and forth answering the questions.

Ashley said they have all done well, all things considered, but it’s hard when Kate wants to know when they might be able to go back to their normal routines.

“That’s the hard part for me as a mom, because I don’t know,” Ashley said. “I don’t know when that will be, but until then we are going to stay the course and follow the recommendations to keep them safe.”