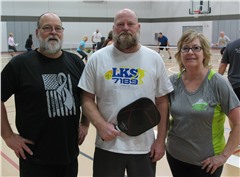 One of the biggest pickle-ball tournaments in the history of the world is coming to the Cape Girardeau SportsPlex next weekend, Jan. 19-20. It’s the brainchild of Jackson resident Doug Brown, who is using the tournament to raise funds to help fight brain cancer.

Every penny that players pay to enter the tournament will be donated to the Washington University Cancer Center in St. Louis to help fund brain cancer research. As of last week, that added up to more than $12,000. Another $15,000 or more is expected to be donated on top of that, thanks to sponsorships and donations.

“I’ve been wanting to have a tournament for a long time,” Brown said. “When I found out my brother had brain cancer, I decided to do it. One hundred percent of the money raised will go for brain cancer research.”

Brown isn’t running the tournament himself. People are coming from all over the state and from as far away as Wisconsin and Tennessee to help run the event.

“Our community has really stepped up,” Brown said. He went to the community to seek donations and sponsorships to help pay the costs of the tournament. A raffle is being held that has 50 items, including a recliner donated by Ross Furniture and an outdoor porch swing made by a pickleball player.

Brown will pay for half of the cost of the SportsPlex rental, and for food, trophies, etc., using funds raised from donations and sponsorships. Visit Cape has generously donated half the cost of the facility rental. By paying the costs of the tournament with donations, every penny paid by the players can go for brain cancer research, he said.

Brown’s brother, Curtis, is a former JHS football player and wrestler, and a retired military man. He played racquetball at Southeast Health-Point Fitness in Jackson until he discovered pickleball.

Pickleball is played on indoor courts with paddles and Wiffle balls. It is like a cross between tennis and ping pong.

The sport is growing in popularity around the country. Many people make use of the pickleball courts in the Jackson Civic Center on a regular basis.

One day last April, after playing pickleball in the morning, Curtis Brown had a seizure and learned that he had brain cancer.

He had plans to play in the U.S. Open of pickleball, which is held the last week of April and first week of May in Naples, FL. Those plans were cancelled after he learned of the brain cancer.

Doug Brown is impressed with the generous support this community has given to his tournament. “We live in a pretty good community. That’s just evidence of it.”