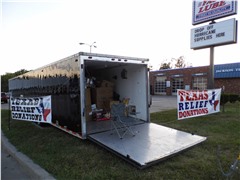 An empty race car trailer sat parked in front of Jackson Tire last week, waiting to be packed with supplies for Hurricane Harvey victims. It left Saturday, headed for the Houston, TX, area.

The idea to stuff this trailer with supplies began with Fletcher Cox, a member of the Philadelphia Eagles NFL football team, whose hobby is drag racing. “He’s racing when he’s not playing football,” explained Jason Glueck of Jackson Tire, a drag racer himself, although nowadays he races less and watches more.

The racers communicated through social media, seeking a way to help hurricane victims. One racer in Texas mentioned that his church was helping some of the smaller areas outside of Houston that were flooded.

Shawn Sladek, a drag racer (who works at McDowell South in Jackson) volunteered the use of his trailer to carry supplies to that church, but he needed a place to park it while donations came in.

Glueck volunteered the corner of the property at Jackson Tire, which is right on Jackson Boulevard at a stoplight, and is highly visible to a lot of traffic.

They promoted their drive for supplies on radio, TV and Facebook, and the trailer began filling up. When the back filled up last Wednesday, Glueck moved some supplies into the front section which is normally Sladek’s living quarters when he’s at races.

To pull the trailer to Houson, Morlan Dodge in Dexter donated the use of one of its trucks.