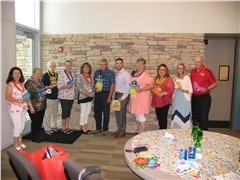 Flowery Hawaiian shirts and plastic leis were everywhere, and David Reiminger’s barbecued pork was on the luau menu as volunteers of the year were recognized at the 14th Annual Volunteer Appreciation Luncheon June 1 at the Jackson Civic Center. The luncheon was sponsored by the Jackson Area Chamber of Commerce Non-profit Alliance.

There were 140 in attendance, which was an “all-time record,” said Brian Gerau, the Chamber’s director.

“Thank you very much, and congratulations on that honor,” he told the audience. Since coming to Southeast Missouri in 2015, Vargas and his wife have been impressed by the level of giving here. “We have been very impressed with the level of engagement the community has for the less fortunate,” he said.

The University has a program called “Southeast Serves” that encourages students to volunteer. In 2016, Southeast received the Presidential Award for Community Engagement because 5,000 students in 2014-15 participated in 80,000 hours of volunteer work.

“Only one out of four adults engage in volunteering. It’s something we need to encourage,” he continued. Surprisingly, the age group that has the highest rate of volunteering is that of 35-54 years old — people who are very busy raising children and are active at work. “If you want something to get done, give it to someone who is very busy,” he quipped.

Another program at Southeast, called the “Shout Out Award,” recognizes people who go above and beyond their call of duty. This award has gone to bus drivers, student advisors, faculty, staff and members of the grounds crew. People are honored at their place of work with a surprise visit from Vargas, who presents the award.