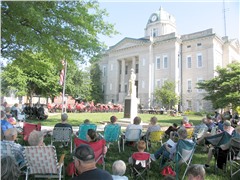 America’s fallen servicemen and servicewomen were honored throughout Jackson and Cape Girardeau on Memorial Day.

Under sparkling blue skies and sweltering sun, ceremonies began in Jackson at 9 a.m. with the Muny Band playing patriotic tunes.

Usually held at the entrance to the City Cemetery, this year’s ceremony was moved to the courthouse lawn so the refurbished World War I Doughboy statue there could be rededicated.

Forty names appear on a bronze plaque on the statue — names of those from Cape Girardeau County who gave their lives  in defense of liberty during World War I, which ended 100 years ago this year.

A new plaque has been added with seven names that were missing from the original.

“There is no better way to honor their sacrifices than to never forget,” said U.S. Rep. Jason Smith, the keynote speaker.

Retired Navy Commander Lawson Burgfeld has researched the names on the plaque and has written brief biographies on each. He announced the names and gave a brief statement about each.

“E.S. Taylor is Cape Girardeau’s unknown soldier,” Burgfeld said. There were two Taylors on the census and Burgfeld is sure the soldier is one of them, but he was unable to identify which Taylor is on the plaque.

Ben F. Eggers was killed in action on Nov. 5, 1918, just six days before the armistice was signed. He had been out of the trenches twice before, but “he couldn’t survive the third time,” Burgfeld said.

A complimentary breakfast followed the ceremony at the American Legion Hall in Jackson.

Anyone visiting the City Cemetery or Russell Heights Cemetery in Jackson that day would have noticed small American flags placed at the tombstones of veterans.

Flags also were flying in the breeze at Cape County Park North’s Avenue of Flags.

At Fort D in southern Cape Girardeau, re-enactors treated visitors to exhibitions of cannon fire and rifle firing. There also was a demonstration of washing clothes and crocheting, with dulcimer music performed by the Front Porch Players.