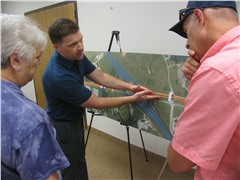 A good crowd of interested residents turned out for a public meeting held by the Missouri Department of Transportation Aug. 21 at the Osage Centre in Cape Girardeau to discuss the replacement of I-55 bridges over Highway 61 between Cape Girardeau and Jackson, and the conversion of the existing interchange to a diverging diamond interchange (DDI).

Highway 61, which currently passes under the interstate with a wide grassy median, will be redesigned into a DDI with concrete barriers separating the east/west lanes. Removing the grassy median will allow the highway to pass under the shorter bridge spans (which will still have room for a walking/biking trail).

This switch allows for left hand turns to be made without crossing oncoming traffic, making the interchange safer.

A 2016 evaluation of diverging diamond interchanges across four states — Missouri, Kentucky, New York and Tennessee — found that road users could anticipate substantial reductions in crashes following the conversion of a conventional diamond interchange to a DDI.

Cape Girardeau has requested an additional traffic signal be installed at Veterans Memorial Drive. That signal, the two at the bridge, and the signal at Old Orchard Road on the Jackson side will be coordinated so drivers on Highway 61, if they have to stop at one light, will have green lights the rest of the way through the interchange.

Traditional signalized intersections have eight phases (so all left turns have turn signals). The traffic signals at the DDI will operate with only two phases, so wait times and traffic congestion at the intersections will be reduced.

Access to Wedekind Road on the south side of Highway 61 in Jackson will be permanently closed. Drivers will be able to access Wedekind Road by turning south at the Old Orchard Road signal.

A break in access will be included on Highway 61 so that a future road can be built between Old Orchard Road and I-55 on the south side of Highway 61. It will be further west than the current Wedekind Road intersection, because the current intersection is too close to the DDI.

“We understand construction will involve some short-term inconvenience for motorists, but in the long-term this project will provide needed improvements in both safety and congestion,” added Williams.