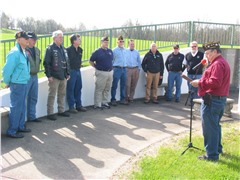 The Veterans Memorial at Brookside Park in Jackson now has new lighting at night.

The memorial was originally dedicated in 1993. Occasionally, the original lights had problems, so the City of Jackson was called, and the problems would get fixed.

Over time, the problems became more frequent and more serious until the lights were deemed to be beyond repair.

Electrician Art Woods, a member of VFW Post 10495 and the Brookside Memorial Foundation, volunteered to replace the lights. He recommended LED lighting, which is longer lasting and requires less maintenance. He began securing bids for the project.

Mike Austin of Cape Electric Supply suggested that the Foundation meet with RAB, pioneers in LED lighting. RAB recommended that lights for the flag poles be upgraded as well, and offered a 50 percent discount on all of the fixtures needed.

Cape Electric Supply offered an additional 50 percent discount on the fixtures, making the total cost free. “While we didn’t expect this, it certainly made the project affordable,” said Larry Koehler, Foundation treasurer, during a dedication ceremony last Wednesday.

“We have received many comments about how much better it looks now, and we are confident that this level of lighting can be maintained for many years to come,” said Koehler.

The Memorial has been expanded, and there is now room to add more names of veterans to it. For more information, e-mail Koehler at taxman520@gmail.com.