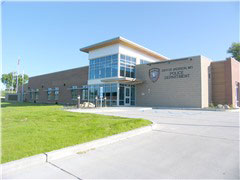 Jackson has a new police station. The $6.5 million facility was completed by Design-Builder Penzel Construction last month. The City was issued an occupancy permit April 20, the Jackson Mayor and Board of Aldermen were told during study session May 4.

The police department has been gradually moving from its old facility next door that was shared with the fire department.

“The police department has been using the station partially,” said George Harris, the design-build project manager. “It’s theirs to use.”

Some minor items may still need work to complete a “punch list.” Although the building is substantially completed and is starting to be occupied, the final completion date on the contract will remain May 28. The final contract price is $6,499,825.

The Board of Aldermen will approve payment of the final bill at its next meeting May 18.

• Utility bills: The City has not cut off utilities for nonpayment of bills during the months of March, April and May, City Administrator Jim Roach told the Board. This is because of financial hardships people may be facing due to the COVID-19 crisis. In addition, Roach recommended that the City waive late payment fees and interest for those months.

If late payment fees and interest are waived, customers would still be responsible to pay their actual monthly utility bill when they are able.

Mayor Dwain Hahs said he hoped customers would pay their utility bills when they received their stimulus or unemployment money. The Board will vote on a formal resolution to waive penalties at the May 18 meeting.
Beginning in June, late fees and penalties will be added to utility bills again.

• Municipal court: City Attorney Tom Ludwig announced that it is hoped that municipal court will be “back up and running” within two weeks and that the court cases will be caught up by the end of June.

• COVID-19: The Board of Aldermen met in person May 4, although seating was changed to keep people 6 feet apart. The meeting continues to webcast as well.

Mayor Dwain Hahs updated the Board on the COVID-19 Response Plan.

• Roundabout: The Board was updated on the progress of the roundabout at East Main Street and Shawnee Boulevard. It is about half done. Traffic has been moved to the half that is done while the other side is under construction. The deadline for completion may be moved back to mid-July, but Lappe Cement hopes to finish work by July 1.

• Annexation: The Board accepted a petition and authorized a voluntary annexation agreement regarding property at 357 Timber Lane, as submitted by Todd Johnson and Kaci Jo Sparkman. A public hearing was set for 6 p.m. Monday, June 1.

• Locating city utilities: Whenever someone calls Dig Right before digging on a property, someone comes out and marks utilities. The City has an independent contractor locate city utilities for Dig Right. Precise Target Locating of Cape Girardeau submitted a low bid for this work, and the Board will award a contract at its next meeting. It is a three-year contract with options for additional years.

• City app: Mayor Dwain Hahs discussed in study session the opportunity for the City to have its own app that people can load on their phones. The app allows the City to send alerts to residents, but it will not allow residents to contact the City. Several Board members and City staff members will test the app for a few weeks and report back if they think it is worth the cost to the City.

• Recycling center: A report was given in study session by Rodney Bollinger, administrative services director, regarding the Jackson Recycling Center. Prior to 2019, the recycling market was strong and the center made a profit for the City. Since then, the City has lost money operating the Recycling Center.

It is estimated that half of the people using the Recycling Center are Jackson residents. Others come from out in the county. That is a two-edged sword. When the recycled materials made money for the City, it was a good thing to have more recyclables. But when the City is losing money, it’s not helpful to accept material from nonresidents.

It is estimated that the Center lost $3,650 last year, not including labor and equipment cost. So far this year, the Center has lost $1,250. It just reopened last week following a closure due to COVID-19.

“The markets are not rebounding,” said Bollinger. “We hope they will.”

Even though the recycled material does not make money for the City, recycling saves the City money because that material is not being hauled as garbage to the Jackson Transfer Station, which costs the City money.

The aldermen indicated that recycling is a nice service for residents and showed no desire to discontinue it or to limit it to residents only.