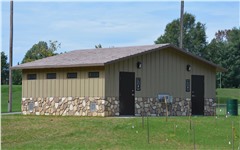 Representatives from the contractor Brockmiller Construction met with city staff and Mayor Dwain Hahs about the delays and said they would like to make it right.

Koehler said the construction company offered to provide additional work at the site, including a path from the restrooms to the parking lot. Negotiations between Brockmiller and city staff were planned for that week.

The prefabricated concrete structure, located near the girls softball field and featuring 14 stalls, opened for public use on Sept. 17.

• Hahs discussed during study session a letter he wrote and planned to send to the Missouri Department of Transportation. In the letter, Hahs asks MoDOT to consider adding a walkway for pedestrians and bicyclists to safely cross the diverging diamond interchange planned for the intersection of U.S. Highway 61 (East Jackson Boulevard) and I-55.

“We think it would be used,” Hahs said of a walkway from Veterans Memorial Drive in Cape Girardeau to Old Orchard Road in Jackson.

At this time, there is a walkway underneath the overpass in MoDOT’s plan, but that walkway doesn’t go through the entire intersection. An additional concern is there is no plan on how to connect that walkway in the future if MoDOT doesn’t add the walkway during this construction.

Hahs added that Jackson received an initial municipal agreement from the City of Cape Girardeau about each city’s responsibilities related to the intersection. The City of Jackson’s staff and legal council will review the agreement.

• The city received one response to the request for qualifications for the wastewater facility plan implementation project. Horner & Shifrin, based in St. Louis with an office in Poplar Bluff, met the cities requirements and will begin negotiations. A proposal is expected in a couple weeks.

• The council approved a resolution to inform city voters about Missouri Proposition D, which if passed would increase the motor fuel tax by two and one half cents per gallon annually for four years.

• A change order in the amount of $24,900 was approved to go to Insituform Technologies USA, of Chesterfield, relative to the 2018 Sanitary Sewer Lining Program.

The unit bid price was well under the estimated amount for the project, so the change order was issued to increase the amount of sewer lining ordered.

• The council passed an ordinance accepting a corrected right of way deed for 105 Harmony Lane from The Stone Family Trust, dated Feb. 25, 2016.

• A change order in the amount of $69,000 was approved to go to Jokerst, Inc. of Ste. Genevieve. The change order, which raised the total 2018 Asphalt Pavement Improvement Program budget to $325,000, added a full-depth repair of Mary Street.

Work had already begun on an overlay on Mary Street when unexpected findings of the asphalt subgrade showed an overlay would result in a below-average finished project that would require numerous repairs in the near future.

• The council accepted the dedication of a temporary construction easement deed from Kelcy Sayler. The easement is related to the traffic signal project at East Main Street and Oak Hill Road.