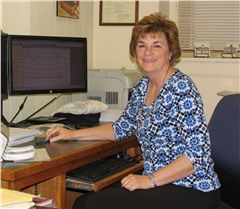 Circuit Clerk Patti Wibbemeyer of Fruitland retired Dec. 31 after eight years in her elected position. In addition, she completed 37 years of employment in the circuit clerk’s office.

“In 1981 I started working here in the circuit clerk’s office, but at the Common Pleas Courthouse [in Cape Girardeau], handling juvenile cases and accounting,” Wibbemeyer recently told The Cash-Book Journal.

Throughout the years, her duties changed. She helped process child support payments until that duty was moved to Jefferson City. She then began working with divorces and other civil cases. Her responsibilities included accepting pleadings from attorneys, issuing summonses, swearing in witnesses and going into the courtrooms to record the proceedings.

At the end of her career, she mostly handled jury trials. She was responsible for getting juries together for court. She also handled personnel issues; she supervised 24 deputy clerks.

The circuit clerk’s office is divided between the County Courthouse in Jackson and the Common Pleas Courthouse in Cape Girardeau. She found herself going back and forth between both offices, filling in for deputy clerks whenever necessary.

A number of major changes have occurred in the circuit clerk’s office over the years. Computers were unheard of when she first started working there. “Computers were definitely a big change,” she said.

It was back in 1983 or ’84 that Wibbemeyer appeared in a newspaper photo working on the first computer in the child support section with then-County Commissioner Gene Huckstep looking over her shoulder.

Other major changes included becoming part of Case.net, a searchable statewide Internet database of court cases in July 2001, and switching to e-filing in 2013 so all records are now kept electronically. “We no longer have paper files,” she explained.

When the elected position of circuit clerk opened up in 2010, Wibbemeyer nervously decided to toss her hat into the ring. She dreaded the idea of fundraising and running for office, but decided it was the best thing for her and for the circuit clerk’s office.

“You don’t have to have experience,” she explained. “It just takes $50 to file.” Afraid that someone who knew nothing about the circuit clerk’s office might file, she took the plunge into politics.

Wibbemeyer’s worries about campaigning were for naught. She ran unopposed in both elections.

Wibbemeyer said she will miss her coworkers. “I’m really going to miss the people I work with. I’ve made a lot of friends working here that will be lifelong friends.”

She added, “You’re only as good as the clerks you have working for you. You have to have a great team or everything falls apart. I have a great staff.”

Personnel issues, however, caused some of her biggest headaches. Circuit clerk employees are state employees and “are paid so little, it’s hard to keep people,” Wibbemeyer explained. “A lot of people retired during my eight years.”

Wibbemeyer loved her job. “It was just always something different,” she said. “There was always a lot to do and it was never boring.” She said the best part of her job was “working with people.”

She added, “I loved coming to work every day. There was always a lot that needed to be done. In addition to working cases, we were helping people. People would come in needing help and would not know who to turn to. And if we couldn’t help them, we’d point them in the right direction.”

Taking over the reins after being sworn in on Dec. 31 is Charlene “Charlie” Biester.