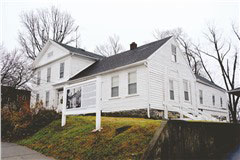 The City of Jackson Historic Preservation Commission heard from John Ford about the restoration of the Frizel-Welling house at 209 W. Main Street. Ford said there has been a lot of work so far to make the building structurally sound, but it is still years away from its final goal of becoming a museum.

Ford said his brother, Steve Ford, purchased the house. Steve has started restoring other historical houses in Jackson, including the Criddle House, the Abraham Byrd home and a house built by his great-grandfather on Greensferry Road.

Steve also created the Taylor Twins Memorial Garden uptown, next to the Frizel-Welling house, in honor of his mother and her sister.

“Steve has come by these properties in incidental ways,” Ford said. “He didn’t set out to buy these properties for any specific purpose, but they all became available.” Ford added that his brother has always loved history and wanted to ensure these historic houses were preserved and not destroyed.

Ford has helped his brother with most of the construction work at the building, saying he’s learning about it as he goes. The brothers have received a lot of help already on the project, including Ben Harsfield, a former owner of the house who grew up there in the 1940s. Harsfield, who is a retired engineer and machinist, was able to draw aspects of the house that are no longer there.

The brothers also received help from Rebecca Beil and Deb Baughn, who have helped catalogue the objects that were in the house. “The most valuable stuff have been taken out and catalogued and archived,” Ford said. “The house isn’t even completely emptied yet, there was just so much stuff.”

Ford said that although he isn’t as much into the history of the house as his brother, it is hard not to get invested in the historical aspects of the house and the items inside. “You can’t avoid the history,” Ford said. “There’s nine generations of the same family that lived in the house who, as Steve said, ‘never threw anything away.’ It really is a time capsule.”

Some of the artifacts are traced to when the house was the initial meeting place of the Masonic Lodge and where much of the planning to found the Presbyterian Church took place. “There is a hand-written document that’s about 15 pages of every items and every process that was involved in making that church,” Ford said.

The house, which is the second oldest residence in Jackson, was originally built by Joseph Frizel in 1818. Frizel married Sarah Bollinger, whose father built the mill in Burfordville.

Joseph and Sarah’s daughter Elizabeth Frizel married Charles Welling. Welling built the second major addition to the home in 1838. Sometime between the two major construction stages, a summer kitchen was built to the back of the building.

Ford said he views the three areas as three separate structures with different building styles. The west wing, built in 1818, has a Cape Cod style, while the larger east wing, built in 1938, has a Greek revival style. “They are all joined now, but you can very easily see that they are three distinct buildings,” he said. “When it comes to an HVAC system, we are probably going to have two separate units.”

Both the east wing and the summer kitchen had major damage to the sill plate that anchors the house to the foundation. Termites and moisture had caused damage to the Oak beams that Ford thinks has been ongoing since the house was built.

Further damage to the summer kitchen resulted from a large chimney being removed, causing the building to lean and a need to be braced. “I ended up pushing that summer kitchen back about five or six inches, enough to get it back to where it was before,” Ford said.

Replacing the sill proved more difficult, since they couldn’t lift the floor to take the weight off of the foundation. “I had to brace the floor to the ceiling and cross brace it, so there was basically a building inside the building to hold the ceiling and the rafters up as I jacked the floor,” Ford said. “At the certain point the exterior walls were just kind of hanging there, and then I could slide the beams in.”

The house was painted to preserve the exterior while they are working on the house over the next four or five years. Ford said they also painted “just to let people know something is happening here.”

“Even now, its hard to determine the scope of the project,” Ford said. “It evolves as we find things out. I know when I’m planning to be done, the end of 2024, but I would imagine there will still be work after that.” He added that once the house is fully restored, they plan on painting the house grey to match the house’s original coloring.

Ford said he hopes to have at least a few rooms stabilized by next year, so they can start showing people the work they have done so far. They also plan on creating a non-profit organization called Legacy Preservation Enterprise to maintain the historic properties.