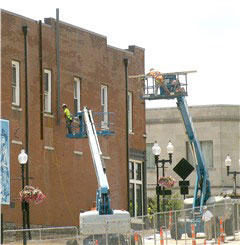 Parking on East Main Street between the old courthouse and the Cape Girardeau County History Center has been temporarily eliminated and traffic diverted to the north side of the street using the parking spaces there, so workers may safely repair the north wall of the building that houses the History Center.

The upstairs of the building has gone through extensive remodeling, including adding an elevator and sprinkler system.

During this last phase of remodeling, roof work and windows will be done.

It was recently discovered that some of the brick on the north wall of the building has separated from the structure. In some places a gap of up to 4 inches exists between the inner wall and the outer wall.

Mark Strickland, speaking before the Mayor and Board of Aldermen July 6, requested a special event permit to temporarily eliminate parking and redirect traffic for the safety of workers and the public.

The permit also had to be approved by MoDOT because of the proximity to the roundabout at U.S. Hwy. 61.

MoDOT added a stipulation that westbound traffic on Main Street could not turn left onto High street, making it difficult to drive to businesses on that one-way street. (traffic must turn around and come back east on Main Street to access South High Street.)

Strickland was unsure of why the wall was separating, but he guessed that the outer wall was not part of the original structure; it was added later and brick ties that held the two walls together had started to fail. He did not know how extensive the failure was; it would not be known until workers could remove brick and examine the structure more thoroughly. Work would begin on the western half and move eastward.

The separation probably is worst near the top of the wall and it may or may not affect the mural painted on the lower eastern end.

It is hoped that the work on the wall will be completed within six weeks, so traffic will be back to normal by the time school starts.