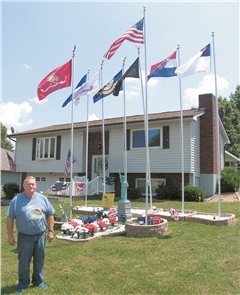 Cars on Oak Street in Jackson slow down as they pass John and Pat Rice’s home. Drivers and passengers crane their necks to gaze at the patriotic display John created in his front yard. Some even stop to take pictures.

Eight 3-foot by 5-foot flags flap in the wind atop their 30-foot flagpoles. In addition to the U.S. and Missouri state flags, there is a flag for each branch of the military: Army, Air Force, Marines and Navy, a black POW/MIA flag and a white Christian flag.

Surrounding the base of the poles are two smaller U.S. flags; landscaping bricks; white granite stones; red, white and blue artificial roses; lights to illuminate the flags at night; a replica of the Statue of Liberty and a plaque that reads, “Proud to be an American.”

Two smaller U.S. flags are attached to his house and patriotic bunting hangs from his banister.

“I have strong ties to the military,” Rice explained. “I have many family members who served in World War I, World War II and the Korean War. And not only my family, but my wife’s family.”

Rice himself served as a Marine in Vietnam. The military tradition continues as his son-in-law served in the Navy and his grandson just joined the Marines. He’ll go to boot camp in September.

Rice created the display himself with some help from his neighbor, Doug Rubach. He had part of it done before Memorial Day and worked throughout June to finish it in time for July 4.

This display was Rice’s way to show off his patriotism. “I think everyone ought to have a flag in his yard,” he said.

Rice bought everything himself at a cost of nearly $3,000. Most of the flags and the flagpoles were purchased from Menards. The Christian flag was purchased from Lifeway Christian Bookstore. “It was not in stock,” he said, “so they ordered me one. A week later I had one and bought a flagpole and the thing was up.”

The Statue of Liberty came from Concrete Castings in Fruitland, who painted the replica to match the original on Ellis Island in New York.

The lights come on about 8:30 p.m. and illuminate the display until morning.

“I went to Menards so many times,” Rice recalled. When he bought the first landscape brick and rock, they were on sale. When he sought to expand his display, the items were no longer on sale and his cost increased; for some items, the cost practically doubled.

When he was building his display, Rice started working early in the morning and continued till evening. He dug holes, let the concrete set, dug trenches and laid foundations, making sure everything was level. He laid heavy black plastic down. Each ring of brick he filled with eight bags of white marble rock. He installed wiring for the lights underground.

Rice said he has received a lot of compliments from people passing by. “While I was working out there, a lot of people would stop,” he recalled. “Veterans tell me how much they appreciate it. Sheriff John Jordan stopped in my drive one morning to say he appreciated it.”

The first flag in the display was that of the Marines. When Rice installed a second pole, he moved the Marine flag over and raised the U.S. flag in its place. After adding the other branches of the service, he decided to include the POW/MIA, state of Missouri and the Christian flags.

Rice wanted to fly the Christian flag because he is a retired Southern Baptist music evangelist. He served all over the U.S. and Germany. He made eight trips to Germany and served as the music minister in the town of Langenselbold. He moved to Jackson in 1979 and continued to serve the churches in this area.

Rice plans to expand his project by at least one more flag. He purchased a replica of the original U.S. flag that has a circle of 13 stars. When the heat breaks, he’ll install another pole, probably next to the American flag already flying. He expects his latest flag to be flying beside the others within two weeks.