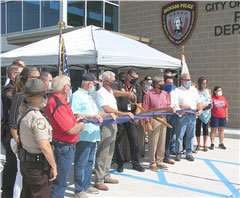 Under a sweltering summer sun and surrounded by attendees in face masks, Jackson Police Chief James Humphreys slammed together the oversized scissors that sliced the purple ribbon in two, officially marking the opening of the new Jackson Police Station.

“I want to thank everyone for being here in this heat,” Humphreys began during his comments. “If you remember, during the groundbreaking, it was so cold, we couldn’t even stick the shovel in the ground. And now we have 103-degree heat.”

He continued, “This facility represents years of promises to our officers and to our community. Our citizens we serve totally understood that we simply had outgrown our old building. The technology and infrastructure was over 40 years old, so we’re grateful to the community for passing our public safety tax by an overwhelming majority back in ’18, and it’s a blessing today to have the support of this wonderful community.

“We’ve been operational now in this building for about eight weeks, and if you ask any of the officers, it has been remarkable, fantastic eight weeks thus far. The improvement going from an inadequate, inefficient and unsafe police station to this state-of-the-art facility is remarkable.

“This building is set up to make us successful in our efforts to keep Jackson a safe place, to keep our officers safe, and continue to be a progressive, dependable department.”

Humphreys listed some of the advantages of the new building:

“We don’t have a basement here, so that makes it extremely nice,” Humphreys said.

“We’ll be able to safely serve our community here for decades to come. We’re proud of this building and proud of our community. Thank you all.”

“A special thanks to the Board of Aldermen,” Hahs said. “They started planning this new police station six years ago. The elected officials worked closely with Police Chief James Hum-phrey and his staff to formulate the initial requirements. The Board also worked with City staff to formulate a strategy to pay for this building and ongoing  operating expenses. This included the use of the City’s financial reserves to pay for the new building’s construction costs, which saved the City over $2 million in interest expense. And then we proposed a public safety sales tax for the ongoing operation cost and the hiring of additional officers of the police and fire departments.”

Hahs also thanked the County Commissioners and Sheriff’s Office. By cooperating with the County in regards to using the county jail for incarceration and having combined 911 dispatching, the City was able to reduce the overall cost of the new police station by more than $1 million.

“I thank you for the confidence you had in us for this project,” he said.

Penzel thanked his design team from TreanorHL and others who assisted in the project. “We as a team have worked on three projects now. We started off with the  County Courthouse, and then we stayed together for this project, and now we’re in Cape doing the new City Hall and renovations to the Common Pleas Courthouse.

“I want to say a little story about Andy. He and his team are amazing,” Penzel said. He was speaking of Andy Pitts from TreanorHL, the architectural firm. Something happened at the first meeting with the selection committee that Penzel had never seen happen before.

At that meeting, Pitts brought three different designs. As he went over the designs, he asked the committee, “What do you like?” and “What do you not like?”

After three hours, the committee was excused for lunch. While they were gone, Pitts took “bits and pieces” from the morning discussion and right there created a fourth concept using the feedback he had received.

“With the exception of some few changes — very minor changes — this is what was built after that very first meeting,” Penzel said.

A tour of the building was originally planned to follow the ribbon-cutting ceremony, but it has been postponed because of the COVID-19 pandemic. Tours will be given sometime in the future.