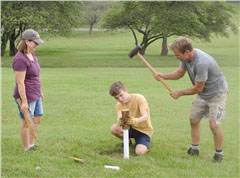 With the help of family and friends, Tate Friedrich of Boy Scout Troop 4011 has replaced all 180 flagpole holders at Brookside Park in Jackson.

Friedrich said he replaced around 70 to complete his Eagle Scout project, but finished all 180 to help the community. He said that many of the old flag holders have been filled with mud and couldn’t be used to display flags during holidays.

“They can’t get the flags in the holes, so some of these veteran flags, that are from actual veterans who passed on and donated the flags, never get put out,” Friedrich said.

First Midwest Bank donated the funds to buy the supplies for the project, including caps that should keep the mud out of the holders in the future.

While some of the old flagpole holders were able to be taken out easily, some of them required a drill to be replaced.

Friedrich said one reason he chose this particular Eagle Scout project was because his father, Robert Friedrich, is a member of Veterans of Foreign Wars (VFW). Robert Friedrich estimated that the previous flag holders were installed around 30 years ago.