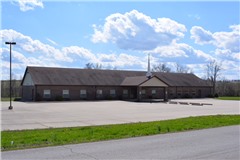 The City of Jackson Planning and Zoning Commission unanimously opposed a request to rezone 2245 Old Toll Road for a future Adult and Teen Challenge Mid-America location on March 14.

Teen Challenge, which provides a residential faith-based program for men suffering from drug and alcohol addictions, was hoping to use the Jackson Church of the Naza-rene as its location for the first part of its program. They hoped to change the church’s zoning to C-2 General Commercial to build a dorm that could house 48 men.

The matter will now go to the Jackson Board of Aldermen, who will need a two-thirds majority to override the Commission’s decision.

The Teen Challenge program is 14 months, broken up into two parts. Cape Girardeau has housed the second phase of the program, which lasts 10 months. The organization planned to house the first four months of the program in Jackson. There is currently a temporary phase one program at the Cape Girardeau location, but it is only able to house 26 people. The phase two program, however, is able to house 175 participants.

The Rev. James Bolin, executive director of Teen Challenge, said it is not feasible to have a phase one next to a phase two facility. Teen Challenge looked at building a phase-one facility on its 350 acres in Cape Girardeau, but there is no additional land with usable water and sewer. Scheduling issues to keep the two groups separate was also a concern. Bolin also thought adding a facility in the Jackson community was a good idea due to the favorable response the Teen Challenge thrift store has received.

At a public hearing on March 14, many Jackson residents who live near the proposed site of the facility spoke out against the zoning change, citing safety and home value concerns.

Unlike the Cape Girardeau location, there is no buffer between the facility and its neighbors. The location is near many residential houses and several schools, including the junior high. Residents mentioned that the Jackson track team currently runs by the proposed facility.

Becky Bockelman, whose ex-husband took part in a Teen Challenge program, said her children wouldn’t be comfortable playing outside if the new facility was nearby. She said her children are not scared of addiction, but having it that close to their home is different. She also said she has talked to elderly neighbors who have lived in their homes since the 1970s, who would be less than a block away from the facility.

“There was an older lady, and I felt so bad because I did not intend to scare her at all, but she instantly teared up and was all stressed over it,” Bockelman said.

Jackie Robertson, the owner and director of Dance Extensions on Old Toll Road, said she doesn’t know how the new facility will affect her business. She has 250 young dancers taking classes, and 98 percent are female. They end classes at night and some dancers walk there from school.

Robertson said she finds the proposal concerning. While she has seen the volatility of addiction in her family, she is worried about 48 men being across the street from her mostly female students and staff. Robertson said people had made remarks to her about safety, and she thought it could change the dynamic of the studio.

Several other people came to the meeting to praise the program, saying these men were not dangerous and there is a drug problem in Jackson that this program helps alleviate.

Bolin and Zach Norris, who run the phase one program in Cape Girardeau, said the program’s participants are supervised at all times and have a rigorous schedule all day. Norris said he hasn’t seen a participant just run off. He said if they want to leave, they are driven to a bus station and given a bus ticket. Norris added that a part of their fee goes to their exit and they would not receive that money if they just ran off.

They also added that the police had never been called to the Cape Girardeau location because there has never been an incident to warrant it. Norris said they hope to have one worker for every five students.

Norris also said participants are screened before arriving at the facility and they go through a medical detox before they arrive. He said their program isn’t equipped for medical treatment.

The property has three acres in the city limits and an additional seven acres outside the county limit. Even if the city council doesn’t overturn the decision, Teen Challenge could still build the dorm behind the church and would still be able to use the church as a worship center. In doing this, the organization would not be able to use city utilities for their dorms.