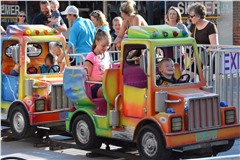 Homecomers is a wonderful multi-day celebration each summer in Uptown Jackson. It’s a time to gather with friends to enjoy live entertainment, fair food and carnival rides.

But Homecomers is not so wonderful for stores on High Street. For more than a week their street is closed to traffic, hurting their business.

All day their street is blocked by empty carnival rides and closed up booths. After 6 p.m., when the carnival comes alive, the shops are closed. And if the businesses stay open late, the crowds don’t shop; their attention is on the kiddie rides in the street.

Janey Foust, co-owner of Cobblestone Corner, came before the Mayor and Board of Aldermen May 20 to represent some of the business owners in Uptown Jackson. She presented a petition signed by 75 people including representatives from 11 Uptown businesses. They requested that the 100 block of High Street remain open to traffic during Homecomers week until 5 p.m. Thursday night.

“The Uptown merchants would like to correct what we see as a problem. UJRO Director Steve Turner along with Carla Jordan, director of the History Center, attempted to negotiate with the Home-comers event chairman (Larry Koehler). Several suggestions were brought up, but there was no compromise.”

Foust claimed the carnival rides and closed streets cause restricted trade resulting in loss of income to the merchants and loss of sales tax revenue for the City.

As a compromise, business owners asked that the carnival be open during the day on the busiest day of the week for the merchants (Saturday), to help draw customers through Uptown merchant doors, but they were turned down.

With no compromise in sight, the business owners petitioned the Mayor and Board of Aldermen to restrict the 100 block of High Street’s closures to Thursday-Saturday, and keeping it open to traffic until 5 p.m. Thursday.

She added, “We want to stress, we are not asking Homecomers to move locations, as we feel Uptown Jackson is historically the correct location for this event. We are merely asking that we work together for an event that is not only good for the region, but is also good for the business owners, current and future.”

Mayor Dwain Hahs asked if having Homecomers open some days (as opposed to only nights) would help the merchants.

Foust replied that it was thought opening from 11 a.m. to 1 p.m. and having food vendors open would be good for the Uptown businesses. But that idea was rejected by the Legion. Koehler said it had been tried in the past and vendors who opened failed to sell enough to make it worthwhile.

Koehler said the carnival owner, Joe Sutton, has tried to open his carnivals during the daytime at other locations but it doesn’t work. Children would rather stay home in air conditioning and play video games during the heat of the day. They will come to the carnival after dark when the temperature cools off.

“It’s not that we’re refusing to compromise, not that we don’t want to, but it has to be something that’s workable,” Koehler told the Board of Aldermen. He didn’t believe opening the carnival and food stands in the afternoon would automatically draw a crowd.

City Administrator Jim Roach asked about making Homecomers shorter. Koehler said the celebration is more than 100 years old. It started out as a week-long celebration and now is Tuesday-Saturday.

Homecomers is the American Legion’s biggest fundraiser of the year. If the celebration is cut in half, it would drastically cut funds to that organization. On top of that, if it rains a night or two, that hurts attendance lowers the amount of funds raised.

Koehler said the carnival owner does indeed set up his carnival in some places for only one or two days, but in those cases he does not bring as many rides.

Carla Jordan said she felt an issue of contention was that an outside contractor (the carnival owner) was making decisions that affected Jackson’s retail businesses.

Uptown businesses suffer a loss of trade — up to 75 percent during Homecomers week, which falls during the slow month of July, when payroll taxes are due, Jordan explained.

Uptown Jackson Revitalization Organization Director Steve Turner said, as an Uptown Jackson group, “we support our merchants.” He said no one is opposed to the idea of Homecomers. “Everyone here wants Home-comers to be a great event,” he said. “What the merchants are concerned about is that they’re the ones who see the pain.”

“We’re trying to help Homecomers. We’re not trying to hurt it. But we don’t want to be hurt in the process,” said Foust.

It was suggested by Alderman Katy Liley that the carnival owner, the Legion and the merchants get together to discuss options.

“I’m glad everyone wants to protect the tradition of Homecomers,” said Hahs.