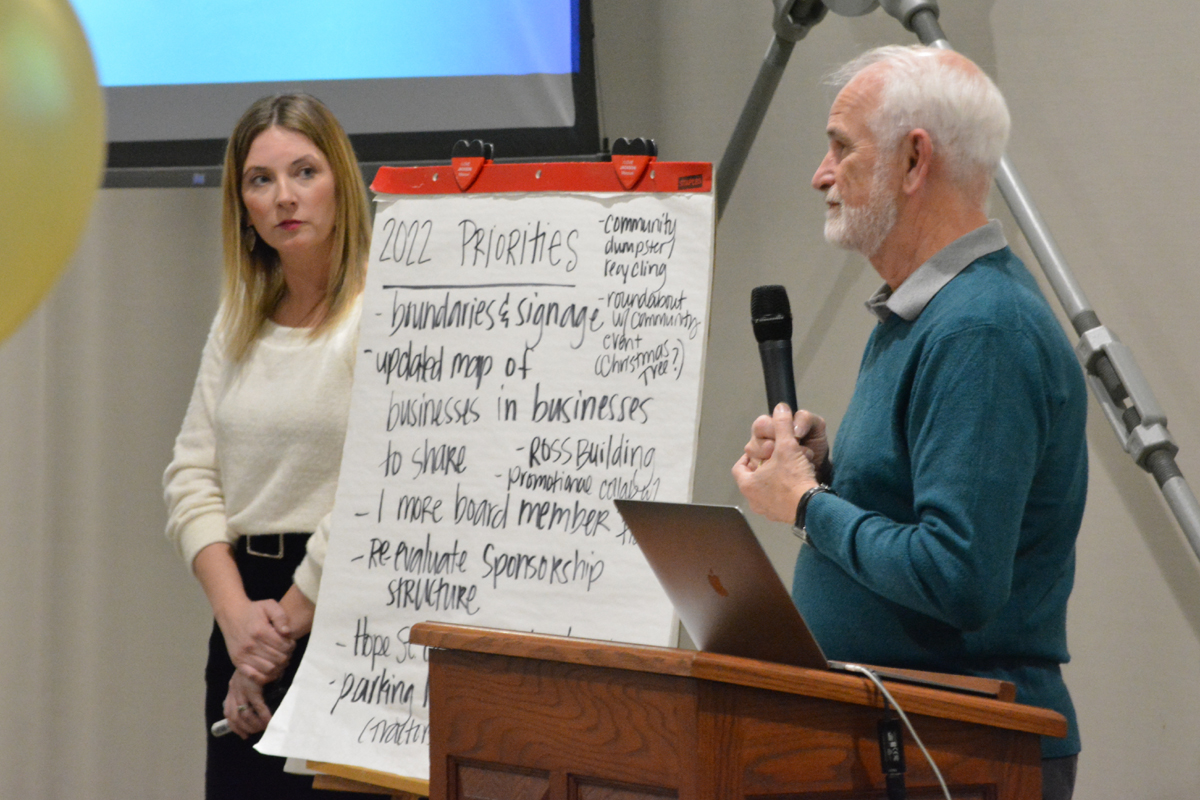 Janna Clifton and Terry Tuschhoff take suggestions from those who attended the Uptown Jackson Revitalization Organization on what the next year’s priorities should be for the organization. Photo by Jay Forness

The Uptown Jackson Revitalization Organization (UJRO) held its annual meeting on Jan. 20. This was the first year the meeting was held at the Jackson Civic Center, with around 40 volunteers and supporters in attendance.

After having to cancel several events in 2020, the organization was able to have a successful 2021 – celebrating the organization’s 10-year anniversary and hosting all its scheduled events. “We had all our events,” UJRO Executive Director Janna Clifton said. “That in itself is something to celebrate for 2021.”

The organization also saw growth in the Uptown Jackson district, with reinvestment in the area totaling $461,382. Clifton said the reinvestment was made through improvements and additions in the area.

Clifton also highlighted the many volunteers who helped UJRO last year, who logged a total of 2,272 volunteer hours in support of the organization.

The majority of theorganization’s income (76%) came from its fundraising efforts, including $26,491 raised through the piccadilly-style auction Springfest and $54,228 from Oktoberfest. Overall, UJRO was able to raise around $118,000 through its events.

UJRO’s remaining income comes from the City of Jackson (12%), grant funding (7%), and Missouri Main Street Connection (4%). Clifton said the area UJRO will be trying to grow the most this year is its number of individual and business supporters.

“Our supporters for 2021 made up one percent of our income structure and we are looking to grow that number in 2022,” Clifton said. “We have been working really hard to get our identity out there, to make sure everyone knows what we do and who we are – we have to have supporters to do that.”

Janey Foust and Amy Beussink were recognized for their work within the organization. The owners of Cobblestone Corner announced their retirement recently, with Celia Willett purchasing the business.

Foust and Beussink said they will remain involved in Uptown Jackson as volunteers. “This came very suddenly but is a good thing,” Foust said. “A cool business is coming in and you will like it.”

“It has been a year, but we have a lot to look forward to,” outgoing Board President Terry Tuschhoff said.

“It’s bigger than everyone realizes,” Clifton said, adding that the district runs from Southern Bank at the corner of Main Street and Farmington Street all the way to Ken’s Ace Hardware and the railroad tracks.

Signage is also in the works to indicate the location of UJRO’s office at 100 N. Missouri Street in Jackson.

Plans are also underway on updating and showcasing the fountain in front of the former Cape Girardeau County courthouse in Jackson. Clifton said the fountain will turn 60 years old this June.

“What better time than now, when plans are being made to update the historic courthouse, to showcase the centerpiece of our district,” Clifton said. “This is something you will hear a lot more about and is something we are really working toward.”

This year’s events include the upcoming February Annual art event on Feb. 26. This year’s February Annual, themed “We Will Raku,” will feature the Japanese style of pottery Raku. Other events scheduled are Springfest on April 22, Jackson In Bloom on April 30, Oktoberfest on Oct. 7-8 and the Christmas parade on Dec. 4.

Clifton mentioned they are also working on adding a “VintageFest” event that will feature crafts and antiques, as well as a current grant opportunity with Missouri Main Street Connection that focuses on marketing heritage and cultural tourism in rural Missouri.

Other priorities for the upcoming year include creating a map of the uptown district, reevaluating the organ-ization’s sponsorship structure and finding long-term uses of empty buildings in the uptown area including the former Ross Furniture location on High Street.

Missouri Main Street Connection training events will be open to UJRO volunteers and community members in March, September and November. In addition, merchant seminars for Uptown Jackson businesses this year will focus on time management.