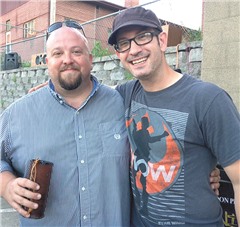 Some Uptown Jackson streets will be closed starting Thursday evening for the filming of a feature film, “All Nite Skate”.

On Friday, crews will film a scene in which a car travels from Jones Drug to Jackson High School.

The film is the brainchild of Jackson native Nick Murphy. He wrote the script and will direct it. He admits it is somewhat autobiographical.

“”I grew up here,” Murphy told the crowd gathered at a Chamber Breakfast May 18. His parents owned McCombs Funeral Home. He graduated from Jackson High School.

During his high school days, he spent time at the Jackson Skate Center, a roller rink that no longer exists. His film revolves around “the last all-night skate of the summer,” he explained.

Murphy, who now lives in California, said his film was “hard to make in Hollywood” because the skating rinks there are too new to represent the 1990s. He found people generally uncooperative toward his independent film efforts and wanting to charge him too much to use their locations.

He scrapped his plans to make his short film in California and brought the idea home. He found a skating rink in Puxico that will double as the Jackson rink.

“In two weeks, we had every location we needed,” Murphy said. “People have come out of the woodwork, asking ‘How can we help?’”

With the friendly cooperation he found here, Murphy was able to expand his short film into a feature-length film.
“It’s a film about all of us,” Murphy said.

Although some of the main stars are from Hollywood, many of the faces will be local. There are roles for “47 kids” in the movie, and some leading roles will be filled by local people. “Everybody used will be from Cape, Jackson and Puxico,” Murphy said. “We’re going to show off Southeast Missouri.”

Murphy plans to premier his film this fall in Jackson.

The Jackson Area Chamber of Commerce held a ’90s trivia night fundraiser to help finance the film. This past Friday night, another fundraiser was held at the Ground-A-Bout in Uptown Jackson.