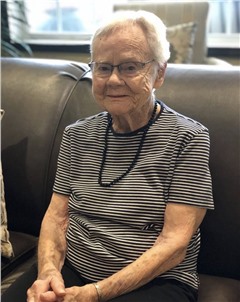 Jackson has a new centenarian. Geraldine Barks, who turns 100 years old on Sept. 12, says reaching this milestone doesn’t feel any different. She does, however, feel lucky about her health and said, “I feel as good, I think, as I ever did.”

Barks was born in Stoddard County to John and Pauline Bollinger on Sept. 12, 1918. She has lived in both Cape Girardeau and Marble Hill before moving into the Villas of Jackson.

“My memories start before World War II, and to compare our country then with what we have now is unbelievable — it really is,” Barks said. “There was about 120 million people in the 30s, and now there are over 300 million. It was more of a leisurely pace, and there weren’t so many people. Traffic was fine because most people couldn’t afford a car.”

Barks was first married to Buzz Choate. After Choate passed away, she married Homer Barks and was with him for 11 years until he died. “I’ve been a gay widow ever since,” Barks said. She has been a widow for 22 years, but she has been kept company by her stepdaughters and their children.

“My life has been a very joyful experience,” Barks said. “Once or twice there’s been bad moments, but everybody has those.”

One of the things she is most proud of is continuing to be financially independent throughout her life. She said that she has seen people be dropped off at nursing homes by their family and then forgotten and was glad that wasn’t her experience. Barks was able to make the decision to move into the Villas of Jackson herself in May 2017, after she fell in her home.

“That’s the thing,” Barks said. “I saved, and I wasn’t exactly stingy, but I was a little bit more focused on what I was doing than a lot of people are.”

When asked what advice she would give to those who are younger, Barks said everyone is here for a purpose, and it is our job to find their purpose and do it.

For Barks, she found purpose through volunteer work, mostly to help the elderly. Barks served on the Southeast Missouri Area Agency on Aging board and volunteered as an ombudsman for 21 years.

As an ombudsman, she visited multiple nursing homes weekly to be a third party that residents could voice their concerns to. “You helped when you could or you could tell them where they could find that kind of help,” Barks said.

She also served as a board member for the Tri-City Nutrition Center and the Bollinger County Senior Tax Board.

“Your life and your world are mostly what you make it,” Barks said. “I wish that everyone could realize that their time here is limited.”

Barks celebrated with family and friends on Sept. 2 at her church in Marble Hill, Hahn Chapel, and will celebrate at the Villas of Jackson on her birthday.