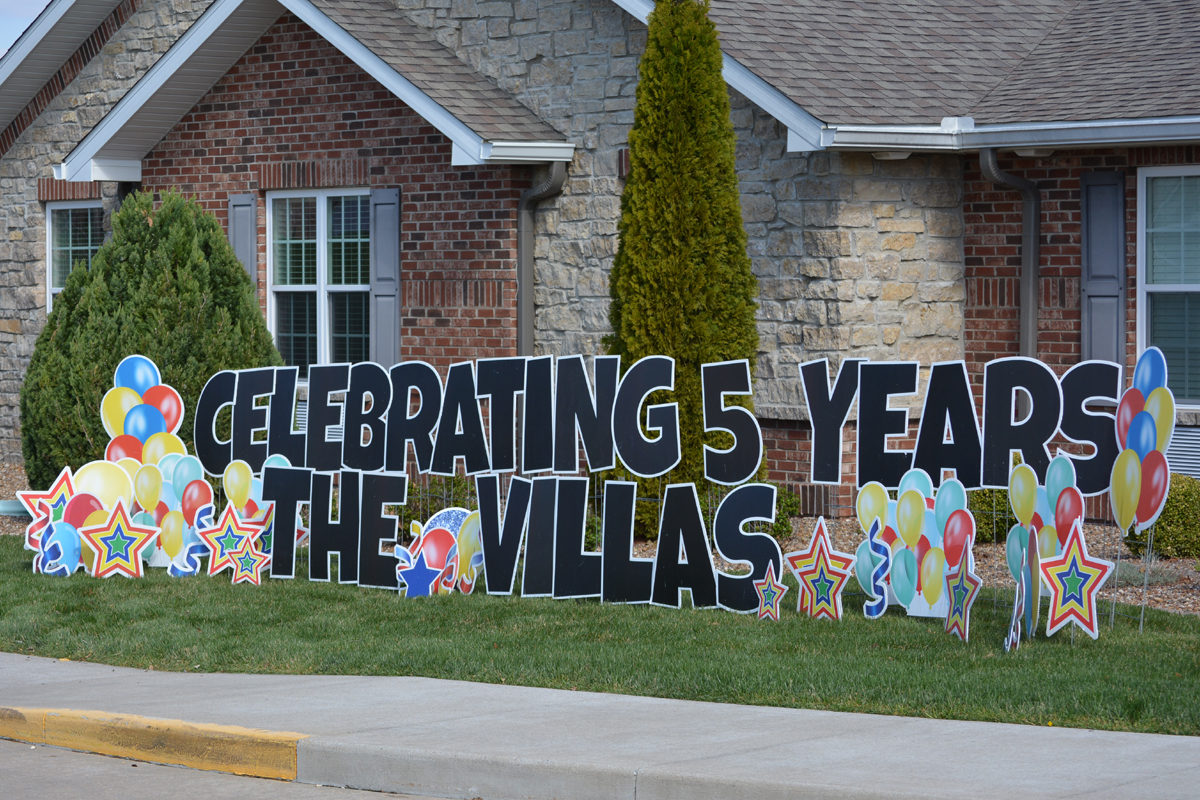 A sign outside of Villas of Jackson let the public know the facility was celebrating five years on April 1. Photo by Jay Forness

The state of emergency that had existed for more than two years in Missouri came to an end April 1, but the COVID-19 pandemic continued to have some lingering effects throughout the year

The Villas of Jackson celebrated its five-year anniversary on Friday, April 1, with a small celebration for residents and staff members. There was no open house for the public because of the CO-VID-19 pandemic.

On Monday, April 4, it was announced that Jen Berti would resign as director of retail development for the City of Jackson. Her husband was being transferred to Cincinnati, OH. (Her last day on the job was June 1. Her position has not yet been filled.)

In the April 5 municipal election, Michael Seabaugh unseated 26-year incumbent Larry Cunningham as alderman in Ward 3. Kristen Lewis replaced incumbent Paul W. Stoner on the Jackson R-2 Board of Education. Dustin Koerber became a new face on the Oak Ridge R-6 School Board. William Lewis was newly elected to the Cape County Public Health Center Board of Trustees. In the City of Cape Girardeau, Mayor Bob Fox was defeated by Stacy Kinder, and former newspaperman Mark Bliss was elected to fill Kinder’s seat as a council member representing Ward 6.

The fourth annual Jackson Reads event was held Thursday, April 7, after a two-year hiatus due to COVID-19. Instead of gathering on the old county courthouse lawn, attendees met for the first time in Jackson City Park.

On April 12, it was announced that Andlle Naeter would replace Lance Mc-Clard as principal of NorthElementary. Naeter had been assistant principal under McClard, who planned to leave Jackson R-2 to become an assistant superintendent in Ste. Genevieve. The change was effective July 1.

On Saturday, April 30, Jackson in Bloom was held in Uptown Jackson while Park Day was held in Jackson City Park and the Jackson Area Chamber of Commerce held its 30th annual Golf Classic at Kimbeland Country Club.

On Monday, May 2, a long discussion about allowing six children instead of four in in-home daycares ended when Jackson aldermen voted down a proposal 1-7. The only alderman supporting the proposal was the newly elected Michael Seabaugh.

St. Louis Rotarian Ralph Zuke bicycled into Jackson on Thursday, May 5, on his way to Houston, TX. He had a homemade rickshaw (made from a blue barcalounger) attached to his bike and sought to raise funds and awareness to fight polio. Zuke gave Jackson Mayor Dwain Hahs a ride around the old courthouse lawn in the rickshaw.

Jackson High School held its prom on Saturday, May 7, at the high school.

At its May 10 meeting, the Jackson R-2 School Board approved two safety projects. One was a $153,679 expansion of the drop-off loop at Orchard elementary, and the other was $221,686 in improvements to the JHS football stadium.

On Thursday, May 12, an Uptown Jackson Vacant Property Open House was held to draw businesses into Uptown.

Jackson resident Carolyn Davis joined a Corvette caravan heading to Dyersburg, TN, on May 12. In Dyersburg, her caravan joined two other caravans and all 60 Corvettes were to head to St. Jude Children’s Hospital in Memphis the next day. The caravan was a fundraiser for hospital and the sight of it was meant to bring joy to the children there.

From May 15 to July 26, residents participated in “Walk Jackson” to learn more about the Public Works Department, get exercise and fresh air, and try to win some prizes.

On Thursday, May 19, Missouri Attorney Gen. Eric Schmitt came to Jackson and addressed the SEMO Pachyderm Club at Delmonico’s Steak House. (In November, he was elected to replace the retiring Roy Blunt as one of Missouri’s U.S. senators.)
On Friday, May 20, United Way held its “Over the Edge” fundraiser on the campus of Southeast Missouri State University.

“Edgers” raised money for an opportunity to rappel 147 feet down the outside of the 12-story Towers South dormitory. This fundraiser had been postponed because of CO-VID-19 and participation was less than expected. The fundraiser will not be repeated next year.

That evening, JHS held its graduation ceremony at the Show Me Center in Cape Girardeau. JHS science teacher Andy Helle was the commencement speaker.

Parts of the City of Jackson experienced a power outage Saturday, May 21. The outage was caused by line damage due to high winds.

Gasoline prices set a new high in May, topping the $4 mark in Jackson for the first time. Most of the Jackson gas stations settled at the $4.09 mark; in Cape, $4.19 was the norm and in Illinois, regular gasoline reached $4.89 a gallon.

On Thursday, May 26, Century Casino in downtown Cape Girardeau held a ground-breaking ceremony for a six-story hotel next to the casino. (Construction is now underway.)

That same day, Jackson held a send-off to the JHS varsity track and field teams as they headed to the state championship in Jefferson City. Three Indians placed in the top eight of their respective events to earn all-state medals in Class 5. Notre Dame had eight all-state finishes in Class 3.

Memorial Day was again celebrated on the old county courthouse lawn on Monday, May 30. As the Jackson Municipal Band began to play patriotic music to start the program, a bald eagle took to the skies over the courthouse, to the delight of onlookers.

A Celebration of Faith was held June 5 at the historic Old Bethel Church. The event was hosted by First Baptist Church in Jackson. The outdoor event included a short program followed by music performed by the Chestnut Mountain Gang, a well-known Gospel singing group.

Millions of dollars in Federal American Rescue Plan Act funds were pouring into this area. Cape County received the second half of its $7.3 million on June 10. County commissioners made plans to spend some of the money to expand the county jail and construct a new building for the Emergency Management Agency.

The city of Jackson received about $3 million. Some ($109,000) was given to the Jackson Senior Center on June 30 to replace aging kitchen equipment and one of the vans used for the Meals on Wheels program. Other city ARPA funds will be used to increase tourism and improve the parks and trails.

The Jackson R-2 Board of Education approved the district’s new strategic plan June 14.

Missouri State Treasurer Scott Fitzpatrick came to Jackson Thursday, June 16, to speak to the SEMO Pachyderm Club at Delmonico’s Steak House. He was a Republican candidate for state auditor, and won that seat in November.

Beginning Monday, June 20, East Main Street, which had been reduced to one lane for water main repairs earlier in the year, was now closed to all but local traffic for pavement improvements. The work was scheduled to be completed July 23.

On Wednesday, June 22, the Cape Girardeau County Prosecuting Office charged Teresa Baumgartner with tampering with physical evidence in a felony investigation connected to the murder of Jessi Wilfong, who had been missing since May 25. Her body was found buried beneath a Millersville barn. Baumgartner would later (July 1) be charged with Wilfong’s murder, along with her live-in partner, Lawrence Schanda, who was Wilfong’s uncle.

Cape artists Aaron Horrell and Barb Bailey’s project of creating a bicentennial mural came to a fitting close on June 23, as a dedication ceremony was held inside Harry’s Place cafeteria on the fourth floor of the Truman State Office Building in Jefferson City, where the mural hangs for the public to enjoy. The public had been invited to each paint one small triangle on the mural, and 16,116 participated. Painters came from 358 Missouri towns, 30 states and Washington, D.C.

MoDOT was making plans to improve U.S. Hwy. 61 from the roundabout at Main Street north to the intersection at Independence Street (Route D). A public meeting was held Tuesday, June 28, at the Jackson Civic Center to gather public input.

On Thursday, June 30, the Allen L. Oliver chapter of the Sons of the American Revolution in Cape Girardeau held a plaque dedication ceremony at the Cape Girardeau County Archive Center to honor Steve Pledger, who had served as director of the archive center and had made many contributions to local history.

(To be continued next week.)