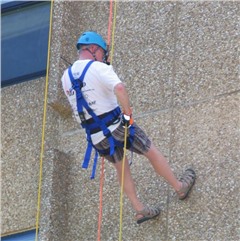 Greg Vaughn is “deathly afraid of heights,” he says. So what possessed him to step off the roof of a 12-story building and rappel 147 feet to the ground this past Friday?

Frankly, he didn’t know what he was getting into.

In his everyday life, the Cape Girardeau resident is owner of a company called Media Leaf. He sometimes DJs for events on the side, and he serves as an ambassador for both the Cape Girardeau and Jackson Area Chambers of Commerce.

United Way of Southeast Missouri decided to use “Over the Edge” as a fund-raiser for the first time this year. “Edgers,” as they are called, raised $1,000 for the opportunity to “go over the edge” — step off a high building and rappel to the ground. In this case, the building was Towers South on the Campus of Southeast Missouri State University.

“I share an office with someone who said I ought to do it,” Vaughn explained. “Before I knew it, I was 12 floors up. I signed up before I knew what it was.”

The closest thing he has ever done to this was to ride the zipline in the mall, and that ride is designed for children.

Edgers were given training on the ground when they first arrived, explained Elizabeth Shelton, executive director of United Way, who went over the edge herself. (So did University President Dr. Carlos Vargas and Rowdy, the Red-hawks mascot. There were 38 Edgers in all.)

After going up to the roof, Edgers were given additional training. They were hooked into their harnesses and given the opportunity to feel what it was like to rappel down the side of the building without leaving the roof. They learned to control their speed with a braking mechanism on the ropes.

Volunteers on the roof helped the Edgers go over the edge and other volunteers on the ground steadied their ropes as they descended. They were basically walking backward down the outside of the 12-story building. They were not supposed to swing too far away from the brick. Shelton, however, who loved the experience, said she sometimes found herself spinning on her way down.

Before they left the roof, Edgers were strapped into a harness and donned a helmet. When all safety equipment was in place, the journey began with baby steps.

It is said that “fear of heights” is really a “fear of falling.” Vaughn said he had no fear of falling during the experience. “I felt very secure [in the harness].” Before actually taking the plunge, “they make you lean off the edge with both hands in the air,” Vaughn recalled. The harness prevents the Edger from falling.

The moment of going over the edge backward was the hardest for Vaughn. “At that moment you’re unsure; you don’t know what’s coming next.”

The rest of the way down, the Edgers are facing the building and can focus on their feet and the wall, not really paying attention to how high they are.

“Unless you look down,” said Shelton, who tried to record her entire descent on her cell phone. She loved every moment of the experience and took about six minutes to reach the ground.

Vaughn didn’t enjoy his journey as much as Shelton, But he was glad to have done it. “The best part for me is that United Way gives the money that is raised to local entities,” he said.

Having beaten his fear of heights to do this, Vaughn is ready for more challenges. “I think after this I’d be willing to do something out of my comfort zone again,” he said.

Shelton was happy with the results of this first-time event.

“We are really pleased with the weather,” said Shelton. “The University has been an incredible host,” she added. And she thanked all the sponsors and volunteers who helped make the event a success.

Shelton had hoped for a bigger crowd of spectators, but thought the number of spectators who watched from the ground — mostly university students — was good for a Friday morning and early afternoon.

In the future, the event will be planned for a Saturday when more spectators can come. However, Shelton was glad the event was not scheduled for this past Saturday, when it would have been in competition with the air festival at the airport.

In addition to raising funds for United Way, “Over the Edge” got people involved in United Way who had previously done so. That too, Shelton believes, is a positive result.