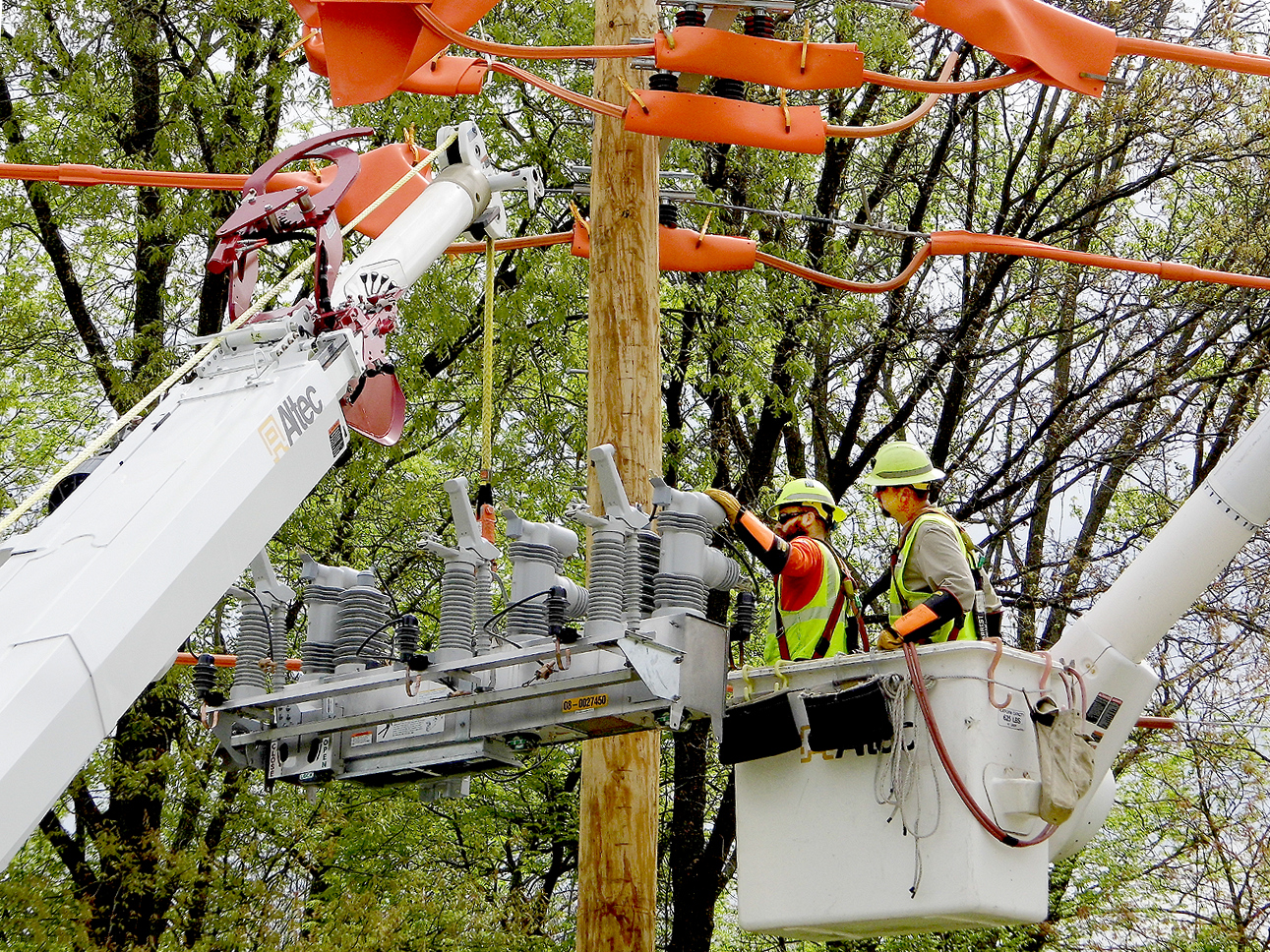 When the next electrical storm rumbles through Gordonville with high winds snapping tree limbs and lighting splitting trees, there is a good chance power will stay on. And if the power should blink out, it may come back on quickly — within seconds instead of hours.

On April 29, Ameren Missouri installed a distribution amplification (DA) device called an Intellirupter or “smart switch” to a power pole in front of the Gordon-ville Post Office, 5850 Hwy. 25. The device will restore power for customers more quickly if an outage occurs.

Intelliruptors are being installed by Ameren Missouri all over the state.

“Since 2019, when the Smart Energy Plan went into play, we installed about 85 just in the SEMO Division. The goal is to install about 3,000 statewide,” said Russ Burger, Ameren Missouri SEMO director.

Before these switches were installed, Ameren had to roll out a truck to the site of a power outage and workers had to manually throw switches to turn power back on.

“That thing’s a self-healer,” said Burger. “It’s a smart switch. It kind of does it by itself. It detects damage on the system, isolates the problem, reroutes power where applicable. You don’t have to roll a truck. It’s pretty nice.”

“We’re investing more in the energy grid to benefit our customers, to keep the lights on with fewer outages; and if we do have outages, they’re certainly intended to be much, much shorter,” explained Rick Eastman, senior legislative representative for Ameren.

“This new smart technology rapidly detects and isolates damage on our system, and reroutes power where possible, reducing outages, sometimes from hours to seconds. With this smart technology upgrade, we’re seeing a 40% increase in reliability,” he added.

During heavy storms last summer, Ameren eliminated 25,000 outages in Missouri thanks to these smart switches. “In total, we’ve reduced the outage count by 13%, which is really phenomenal,” said Eastman. “Our goal is to have one smart switch for every 400 customers in the Ameren Missouri service territory.”

The Gordonville site was selected for the April 29 installation because a substation sits nearby, and power can easily be diverted to shorten outages for a large group of customers as this location sits between Gordonville, Dutchtown and Cape Girardeau.

“Also, we look at stuff like schools, hotels, water treatment plants, things like that. We pick those spots to put these devices,” Eastman explained. Within the area served by this smart switch isa school and several businesses. “This particular switch will benefit about 500 customers in the Gordonville area and the surrounding part of Cape County,” Eastman said.

This is the fifth smart switch installed in our area this year.

In addition to adding reliability to electric service, Ameren’s Smart Energy Plan creates jobs for Missourians. “Our Ameren crews are doing so much work, but we’ve also hired many suppliers and contractors to provide equipment, services and labor. Fifty-six percent of the people that we hire to help support this or who are contracted with us are Missouri-based companies,” Eastman said. “We spent $75.4 million with Missouri-based diverse suppliers, and just in 2021, the total spent in Missouri vendors and contractors is $438 million. So, it [the economic impact in Missouri] has been pretty tremendous,” Eastman said.

Ameren is committed to finish projects scheduled through 2023, but the legislation that enabled Ameren’s Smart Energy Plan ends then. Ameren is seeking the passage of Senate Bill 756 and House Bill 1734 so it can continue to modernize its electrical system beyond 2023.

As workers installed the 1,100-pound Intellirupter using two boom trucks (one to hoist the device up to its position on the pole), 34,000 volts of electricity buzzed through the power line atop the pole and 12,000 volts ran through the distribution lines which hang lower on the pole.

“It’s all hot, so the conditions these guys are working in is pretty impressive,” said Ray Perez, an Ameren service representative in Cape Girardeau.

The pole on which the device was mounted is a new, heavy-duty Class 1 pole, designed to hold such a heavy piece of equipment.

After installing the device on the pole, workers connected “jumper” wires from the distribution lines to the switch, which then energized the switch.

“This whole project cost about $83,000, so, it’s a pretty expensive investment,” said Perez, “but it’ll pay off in the long run, keeping people’s power on and getting them on quicker.”