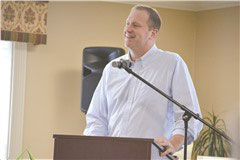 Missouri Attorney General Eric Schmitt spoke to seniors at the Chateau Girardeau about potential scams that target the elderly on Oct. 24. The visit was the fourth and last stop for Schmitt across the state as part of his “Senior Safety Week.”

“Part of the reason that we want to get around the state is to let people know what the prevalent scams are, because they are increasing and they’re getting more sophisticated and using more technology than ever before,” Schmitt said.

The most prevalent type of scam Missouri citizens over 65 years old face are telephone scams, which Schmitt said are now using spoofed numbers that look like they are from local area codes. The calls usually say they are from generic, fake companies like the “Consumer Credit Help” or from an actual business or government agency.

“What’s becoming more and more popular are people calling from what sounds to be legitimate agencies – the Social Security Administration, the local sheriff’s department, the IRS, even the attorney general’s office,” Schmitt said.

Schmitt said these calls sometimes say that if the scammers do not send money to them, they will have the local police take the target into custody. “Even if they are legitimate debt collectors, they can’t arrest you,” he said. “These are civil proceedings.”

Government agencies such as the SSA and IRS will never contact people by phone, demand immediate payment, ask for credit card information over the phone or threaten to bring in law enforcement.

“If you ever have any question about who is contacting you, just hang up the phone and call them directly,” Schmitt said. He added that sometimes scammers prey on the compassion of grandparents and act like they are calling on behalf of their grandchild in trouble. In this case, it is always better to call the grandchild directly to see if the call was legitimate.

Schmitt also talked about Internet scams, mail fraud scams and door-to-door scams. He advised not to click on links from anonymous e-mails or trust Internet pop-ups.

“The key here is that no reputable business, like Apple or Amazon, is going to notify you with a pop-up ad,” Schmitt said. “There are other ways to reach out. They are not going to have something pop up on your screen saying you need to sign in now.” He said these are an attempt to get your sensitive account information.

Mail fraud typically looks like legitimate invoices to try to get people to send money to them. Schmitt advised calling the company or government agency it says it’s from to confirm invoices are legitimate and to not provide banking information. Mail fraud could also be a sweepstakes scam, asking people to mail in a check to receive a bigger prize. “If it sounds too good to be true, it probably is,” Schmitt said.

Door-to-door scams still take place, but Schmitt said they are less prevalent than in the past. He advised not to pay for things up front without a written contract and to not pay more than 25 percent up front.

“We still get a lot of claims from folks who paid way too much up front for a contractor to redo their driveway, and they never see them again,” Schmitt said. He also advised to pay by a credit card or check instead of cash, as it is easier to trace and get back, in the event of a dispute.

Schmitt mentioned that his office is charged by statute, under the Missouri Merchandising Practices Act, to protect consumers from fraud and pursue both civil and criminal fraud violations.

His office has a consumer protection hotline at 800-392-8222 and he advised anyone who encounters fraud to let his office know. This year, the attorney general’s office has recovered around $10 million that was given back to consumers who were victims of various scams.

Schmitt recently joined a bipartisan investigation by 47 state attorneys general into Facebook’s potential violation of antitrust laws. He had previously joined an antitrust investigation into Google. Schmitt said the investigation was similarly made to protect Missouri citizens.

Schmitt said the size of these companies, and the amount of consumer information that they have, raises concerns about how they handle that information and their “behind-the-curtain” business activities.