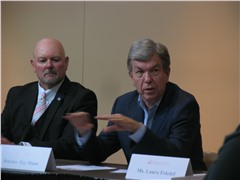 U.S. Sen. Roy Blunt, chairman of the Senate Appropriations Subcommittee that funds the Department of Education, visited Southeast Missouri State University in Cape Girardeau last Wednesday. He participated in a round-table discussion under the copper dome in the Dome Room with students, educators, and administrators to emphasize the value of Pell Grants.

As chairman, Blunt secured a provision in the fiscal year 2018 government funding bill, which was signed into law in March, to raise the maximum Pell Grant award (that can be used to help pay for two semesters) to $6,095, an increase of $175. This was not the normal way to increase Pell funding, he said.

Blunt also announced that the summer Pell Grant program, eliminated during the last years of the Obama administration, has been restored, allowing students to use Pell Grants year round.

Approximately 130,000 students at Missouri colleges and universities (about one third of all students) receive Pell Grants annually. These grants don’t need to be paid back, and they help limit the need for student loans which are required to be paid back after graduation.

The year-round Pell  is expected to help approximately one million students, including some 20,000 in Missouri, stay enrolled year-round. They will complete their program or degree sooner and graduate with less debt.

Trent Ball from Southeast Missouri State University told Blunt that normally there are about 36-37 students who receive Pell Grants for summer school. This coming summer, the Pell Grants will be awarded to 63 students.

Libby Guilliams, director of the Career and Technology Center in Cape Girardeau, said 65 percent of her students receive Pell Grants and 25 percent use year-round Pell.

Joan Miller from Southeast Missouri State University, said one student who was a veteran was about to see his veterans benefits run out before he could finish his education. By adding Pell Grants to the mix, it all worked out.

Blunt said he would like to “try to create a three-year alternative to a four-year bachelor’s degree (by including summer classes).” Students would be able to save on student loans. “It’s easier to pay it back if you borrow less and start earning sooner — a semester or a year sooner. There’s nothing wrong with getting your bachelor’s degree in three years and a couple of summers.”

One Southeast student, R. Xavier Payne, said thanks to Pell Grants, he can graduate in five years instead of taking six or seven. He will be the first in his family to not have $25,000 in student loan debt when graduating.

The bill also helped address issues in the Public Service Loan Forgiveness program, including for teachers and first responders, to cover borrowers who would otherwise be eligible for loan forgiveness, but were enrolled in an ineligible repayment plan.