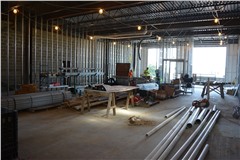 The Cape Girardeau County Commission approved several additions to the new county courthouse construction project during its July 11 meeting, including finishing a sixth courtroom and finishing the lower parking lot off of Missouri Street.

The new courthouse includes space for six courtrooms, but one was originally approved to just be roughed in. Commissioner Charlie Herbst said they left finishing the final courtroom out of the original bid as a contingency plan in case there were further issues during construction. Penzel Construction included an addition of $255,650 that would finish the final courtroom, as part of its original bid document.

Finishing the lower parking lot, which will primarily be used as parking for the sheriff’s office, includes curb and gutter work, proper drainage and concrete work for $97,670. Payment for the sixth courtroom and the parking lot will both come out of bond funding.

A deduction of $14,675 on the project was also approved during the meeting. The deduction was made possible by eliminating natural light in the courtrooms.

Commissioner Paul Koeper said the total for the project is currently at $18.8 million, which is still within the County’s budget. That total includes additions previously approved by the Commission. The Commission had previously approved $229,600 for information technology space in the building, $210,747 of increased funding of the drilled piers and $30,655 for temporary stairs and some lower parking lot funding.

The County approved buying radio equipment for the combined 911-dispatch center between the sheriff’s office and the Jackson police department. Furniture is being installed currently in the new dispatch location, making the addition of radio equipment the next and final major step in the process.

The County and City of Jackson have verbally agreed to each pay for 50 percent of the project’s installation and maintenance, making financial sense for both parties. Herbst said the two government entities have been working on the project for the past two years, starting when Jackson was trying to save space in its new police station which is  currently under construction.

The radio system will include eight consoles that work on analog channels and the Missouri Statewide Interoperability Network (MOSWIN) communication system. Having access to the MOSWIN system will be an upgrade from the County’s current dispatch center, according to Sheriff Ruth Ann Dickerson.

Dickerson said their current system is analog, but most emergency services in the state are trying to switch to MOSWIN. MOSWIN allows for better communication across different agencies, with dispatchers being able to combine several agencies on single MOSWIN channels.

Jackson Police Department Captain Scott Eakers said they have used the MOSWIN system for the past two years and it has “worked perfectly for us.”

Gerald Walton, a representative from WirelessUSA, said it is still important to have the analog system in place because rural fire departments are unlikely to switch to the MOSWIN system.

Besides the upgrades in communication, the current county dispatch center is around 20 years old, making repairs more difficult as time has gone on. “We know for a fact that we are down to buying parts for our radio equipment off eBay,” Herbst said.

The radio system for all eight dispatchers at the new location will cost $1,028,443.79, with the County and the City of Jackson each contributing around $514,000. The proposal includes all installation and maintenance for the system.

The Jackson City Council was scheduled to discuss the proposal this week, and a decision on whether to purchase or lease the equipment will be decided after the City of Jackson approves the proposal.