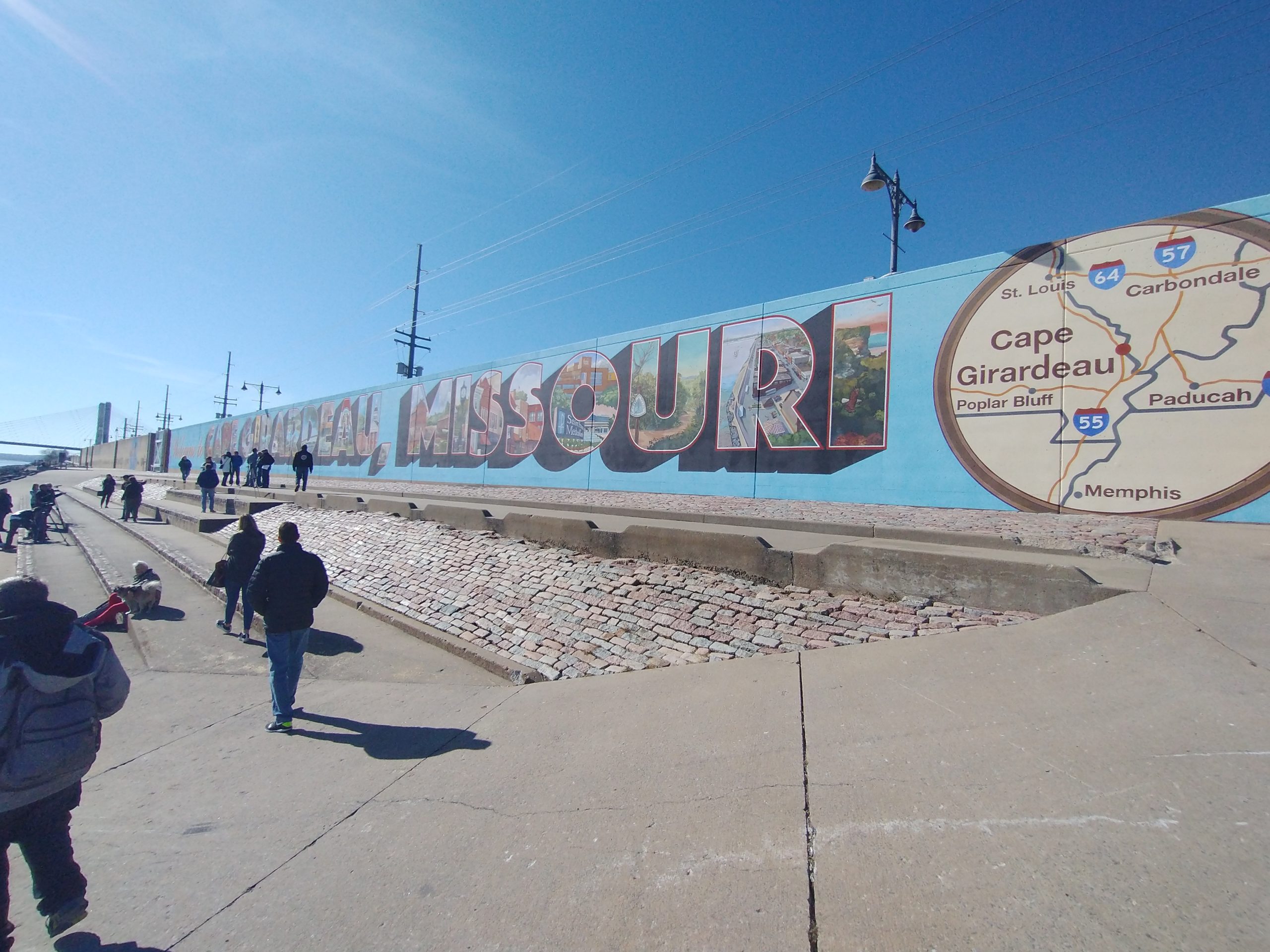 The river side of the flood wall in Cape Girardeau has a new look. Artist Craig Thomas created a postcard look. Photo by Gregory Dullum

A ribbon-cutting ceremony was held Friday morning on the river side of the Cape Girardeau flood wall to mark the completion of a new mural.

Artist Craig Thomas designed a new mural after the previous mural had faded terribly. The new mural has a postcard look, saying, “Welcome to” in script and “Cape Girardeau. Missouri” in large block letters with scenes of this area inside the letters. Jackson is represented by old Steam Engine No. 5 of the Iron Mountain Railway. The Bollinger Mill and Covered Bridge also appear in one of the letters.

The original mural was designed in 1991 by Fred Lincoln, a mural artist from Memphis, TN, who grew up in Cape. “This mural served us well for many years, but eventually the sun, the weather and the river took its toll,” said Danny Essner, a board member of Old Town Cape. The mural was repainted in 2002, but eventually the mural deteriorated to the point that it became “an eyesore,” he said.

Thomas, who had designed the paintings on the other side of the flood wall, came up with a new design for river side three years ago, but there were no funds at that time to complete the project.

“You can see today that the new mural, created by Craig, is pretty spectacular,” Essner said. “I had high expectations, but he exceeded my high expectations. This is the first thing that the passengers on visiting river boats will see when they arrive in Cape. I have to believe they will be impressed.”

Thomas used more durable paint and put the details of the mural five feet above the base of the wall to make the new mural less susceptible to damage from the river. He also coated the painting with three layers of a clear sealant for added protection.

“This is a huge deal for downtown,” added Cape Girardeau Mayor Bob Fox. “It’s a huge deal for our community. You don’t realize how many people travel up and down this river, just on pleasure boats.

“We hope to also capitalize on that, because we have plans to maybe have a marina right up there, just north of Honker’s boat ramp. It’s just one more way for people to visit here, and see what we have to offer.

“I’m amazed at the details in the letters that show, not just our city, but the area. We’re lucky to have a guy like Craig, who lives here in Cape Girardeau, to help.”