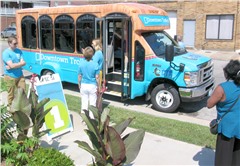 Those were all the words they could remember, and Judy Garland’s “The Trolley Song” ended as unexpectedly as it began.

There was no bell on the trolley, Rediger told the passengers, but an electronic bell is on order and will be installed as soon as it comes in.

A ribbon cutting ceremony Thursday afternoon officially put the 12-seat brand-new air-conditioned minibus into service. (Wheelchairs can be loaded with a ramp in the back and passengers are allowed to stand in the aisle to increase its load; on this inaugural ride, 10 passengers stood.)

A downtown trolley has been a part of Rediger’s vision for Downtown Cape Girardeau for a long time. “Our downtown has undergone a transformation in recent years with the addition of the casino, Broadway streetscape, Marquette Tech District, and numerous new businesses,” Rediger said. “I am excited to see the free trolley come to fruition and help make it even more fun for residents and tourists to come downtown.”

Visitors can park in outlying lots (such as the casino) and ride the trolley to their destination, which will help alleviate crowded downtown parking.

“We believe the trolley will be a wonderful tool to make it easier to access all the unique businesses and events in Downtown Cape. This type of partnership is what makes great things possible” said Marla Mills, executive director for Old Town Cape, Inc. and Downtown Cape Girardeau Community Improvement District liaison.

The first six months of the downtown trolley will be a trial period to gauge ridership and hours.